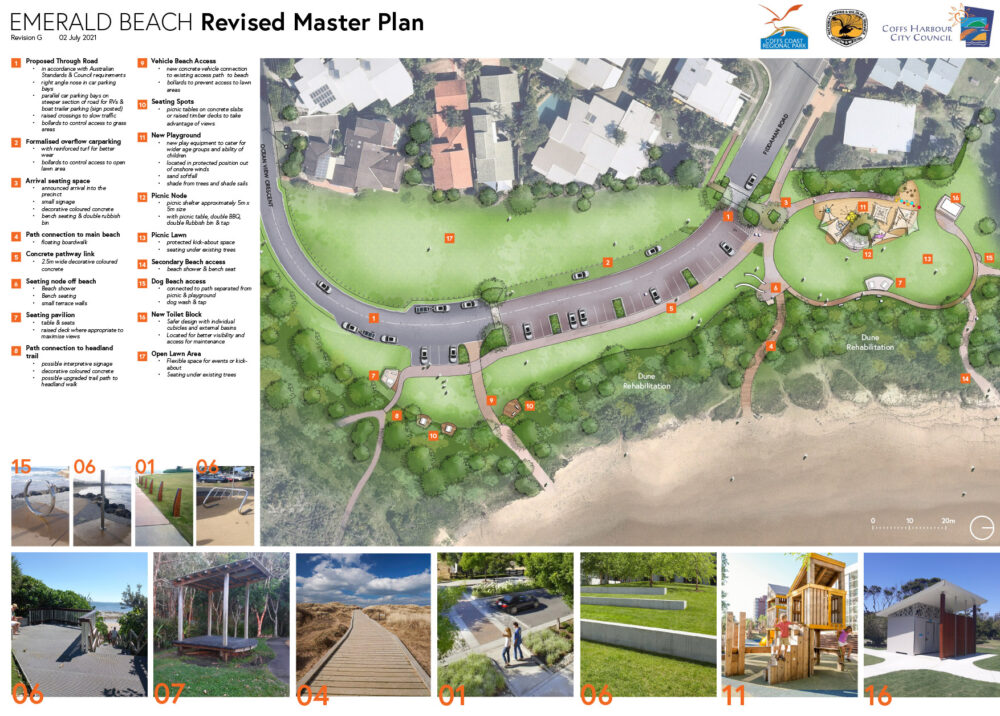 The Draft Concept Plan for the Emerald Beach Reserve is now out on public exhibition for community feedback until 6 August 2021.

“We’ve spent a number of years working with the community on plans to provide improvements and new features to the beach reserve at Emerald,” said Rod McKelvey, Chair of the Coffs Coast Regional Park Trust Board. “It’s been a project that has generated a great deal of passion, which shows just how much the community values this space and the village of Emerald, but we’re confident that the Draft Concept Plan has captured the feedback we’ve had to date.”

Key goals behind the design include:

The Draft Plan on display reflects a community survey in 2019 which identified key outcomes and a community meeting that agreed that a single concept plan – based on those agreed survey outcomes – should be produced. The same community meeting also agreed to the Community Reference Group overseeing the development of the Concept Plan to make sure it had met the brief.

The Draft Concept now on display has also been the subject of two design review workshops with the Community Reference Group. Following the public exhibition for the broader community, the feedback will be collated and used to further refine the concept plan for consideration by the Regional Park Trust Board.

The Draft Concept Plan can be viewed – and online submissions made – via haveyoursay.coffsharbour.nsw.gov.au/emerald-beach It is also available for viewing at local libraries and on the park noticeboard at Emerald Beach. Written submissions should be addressed to: Coffs Coast Regional Park Trust Board, c/o Coffs Harbour City Council, Locked Bag 155, Coffs Harbour. NSW. 2450. Email submissions (with subject line Emerald Beach Reserve) to: coffs.council@chcc.nsw.gov.au

Submissions will be accepted until 5pm on 6 August, 2021.