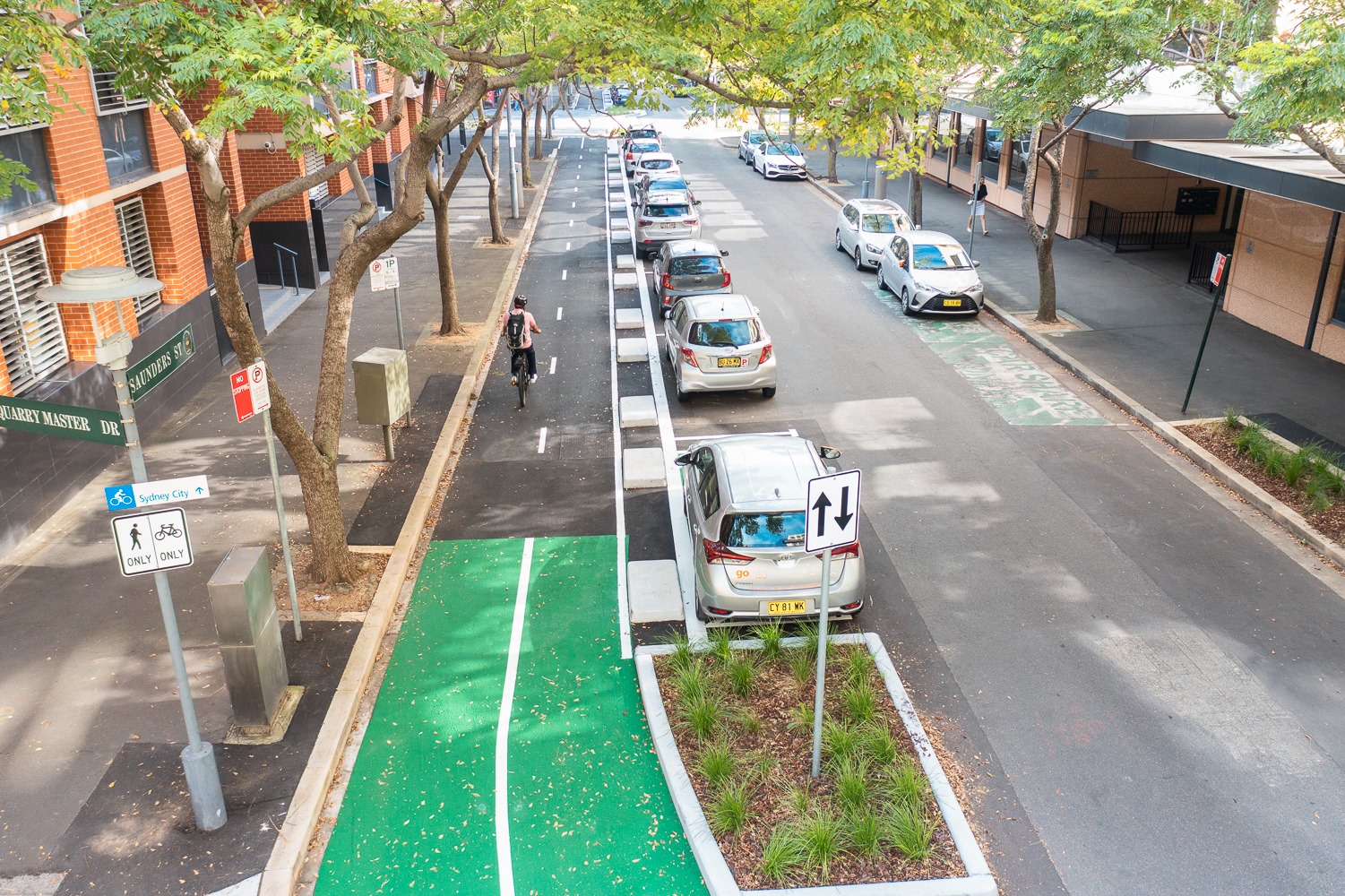 Pictured above is an example of a permanent on-road, protected bike lane.

Work on a protected on-road bike lane along Clarence and Beach Streets – an important component of the Woolgoolga Town Centre Masterplan – is expected to begin in late July 2021.

“A bike path network that offers a pleasurable, easy and safe route for people to enjoy the seaside village atmosphere of Woolgoolga – and simply to get to the beach, shops or work – is a major feature of the Woolgoolga Town Centre Masterplan,” said Mick Raby, Council’s Director Sustainable Infrastructure. “Not only will it offer an alternative way of moving around, but it will help improve overall road safety in the town centre by encouraging safer speeds along Beach Street – another need identified in the Masterplan.”

The Clarence and Beach Streets bike lane will be the area’s first on-road, separated bike lane with physical protection from parking or traffic lanes. It will be installed between the existing pedestrian pathway and on-street parking spaces on the northern side of the roads. At this stage, it is a pilot project and the works are temporary in nature. Council will ask the local community to help us evaluate its success at the end of the year, with a view to making the arrangements permanent, or removing the works undertaken if required.

“We’ve been working with the community to develop a draft Woolgoolga Place and Movement Plan which identifies priority walking and cycling improvements around Woolgoolga,” added Mr Raby. “This pilot project forms part of a key cycling link between West Woolgoolga and the town centre and will help us see how well this type of bike lane can help both children and adults cycle to school, to work, to the beach and town centre.”

Council is also currently working with Transport for NSW (TfNSW) and the wider community to look at ways to improve walking and cycling throughout the whole local government area with safer and more direct path networks – so this is an important step in that direction.

The dedicated two-lane bike path will be installed along Clarence and Beach Street and will take about three weeks to build. Some parking spaces will be realigned to accommodate the bike path and some intersections will also be altered to improve safety for people who ride bikes, drive and walk.

“The message we get consistently when we consult communities across the local government area on what they value most is their love of the outdoors,” said Ian Fitzgibbon, Council’s Group Leader Sustainable Places. “We know our community values time outdoors in nature and their health and wellbeing, and everyone on the Coffs Coast should have access to more walking and cycling paths.”

Council has been consulting with property-owners along the route when preparing the design to best understand their needs, as well as local community groups.  The bike lane design is based on best practice guidelines for providing safer and more convenient cycling networks in urban areas and has looked at successful working examples in many other Australian cities and urban locations.

Planning and Public Spaces Minister Rob Stokes said the Woolgoolga Bike Lane was funded through the Streets as Shared Spaces program, which received an overwhelming amount of interest, with more than 145 applications from 99 councils.

“It’s great to see so many councils keen to provide more public open space for their communities, while revitalising their local economies and beautifying their streetscapes,” Mr Stokes said.

Further information about the pilot, along with the dates of exciting pop-up information events we have coming up, can be found on Council’s Have Your Say website.

Below is an example of a temporary pop-up bike lane similar to that proposed for the Woolgoolga Bike Lane pilot.