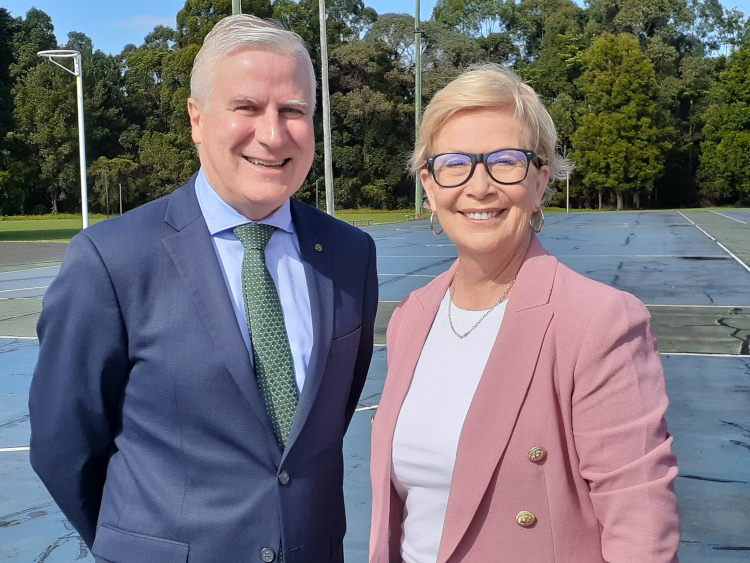 Netballers across the mid-north coast will soon be enjoying a safer and higher quality netball facility with proposed upgrades to the courts at Vost Park in Coffs Harbour soon to get underway.

The $1.8 million upgrade will see all 9 courts reconstructed, drainage improved and upgraded lighting installed to cater for the growing netball community.

The project has been made possible thanks to $1.45 million received by Coffs Harbour City Council for the benefit of the Coffs Harbour Netball Association through the Federal Government’s Local Roads and Community Infrastructure (LRCI) program.

“Our funding boost is helping communities across Australia accelerate priority projects to get people into jobs and stimulate our economy,” the Deputy Prime Minister said.

“Every single job we support is helping communities bounce back from the impacts of COVID-19.”

The Deputy Prime Minister, Federal Member for Cowper Pat Conaghan, Coffs Harbour Mayor Councillor Denise Knight, and members of the local netball community visited the courts today to celebrate the funding and chat through the improvements.

Member for Cowper, Pat Conaghan said netball is such a popular and growing sport, with thousands of players taking to the court each week for exercise and competition.

“The upgrades will provide a safer and smoother surface for local players, and also ensure that Coffs Harbour is well placed to host regional, state and national competition in the future,” Mr Conaghan said.

“The upgrades could also not come at a better time, with this week’s announcement that Australia is set to host the 2027 Netball World Cup… which is sure to increase the sports’ popularity even more.”

“I am delighted that this grant, and Council’s contribution, will mean local netball players will have a really high-quality facility in which to learn, improve, be inspired to achieve, and compete.”

President of the Coffs Harbour Netball Association, Liz King said “We are delighted to receive this major financial assistance for our growing sport and the local community, and would like to express our deep appreciation to all levels of government and their representatives for their recognition and support.”

There will also be larger runoff areas around the courts to ensure they are complaint with Netball Australia Standards, drainage will be significantly improved, and lighting will be upgraded to suit the new layout of the courts.

Construction is expected to commence in the coming months and will be completed by Christmas (weather permitting).