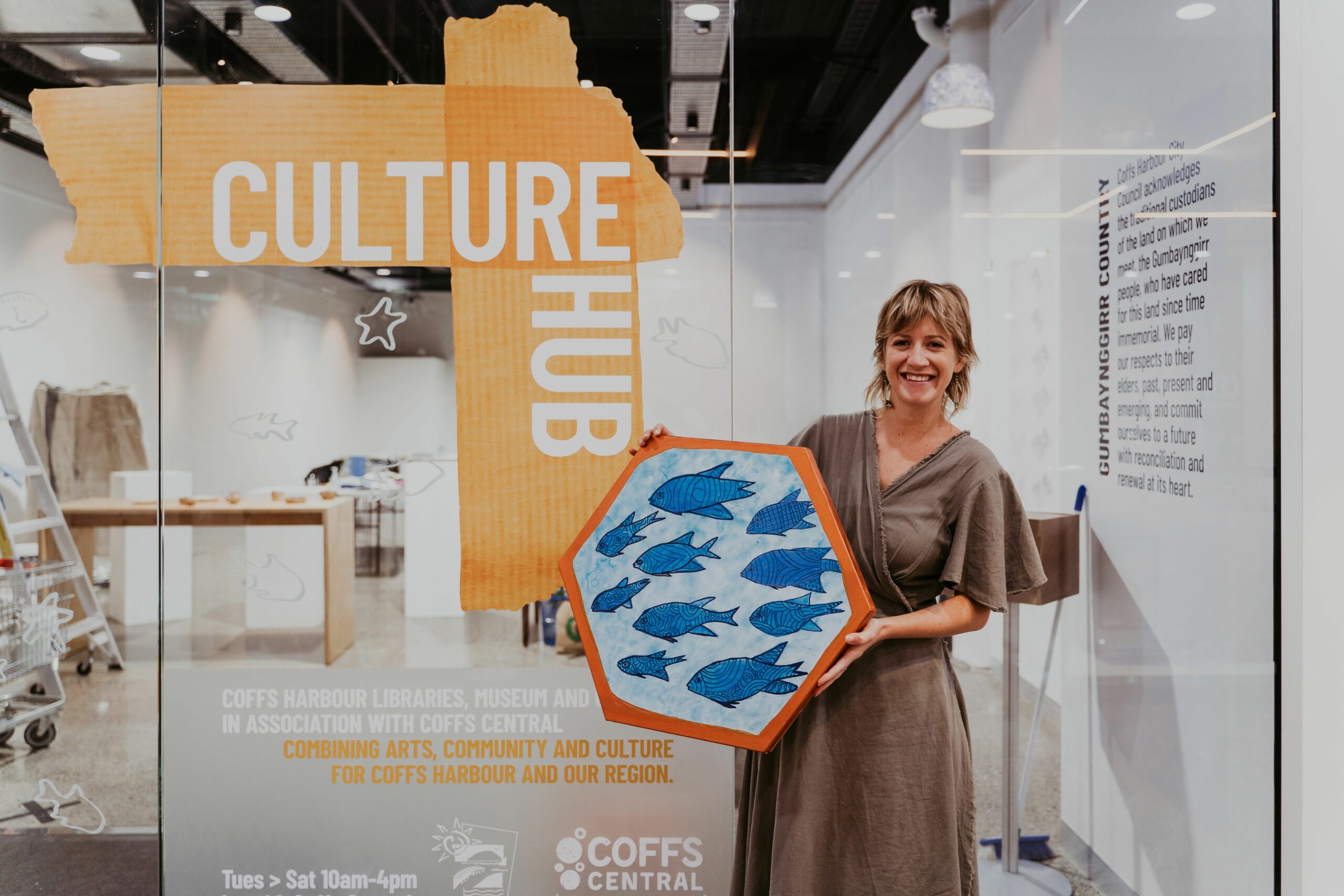 Translating to ‘home fish’ or ‘country fish’, Jagun Yamarr is a new exhibition opening March 20 at Culture Hub, showcasing the artistic works by Gumbaynggirr community and their connection to the local marine environment.

Jagun Yamarr is the next community takeover hosted by Culture Hub, in Coffs Central, bringing the temporary gallery space to life with local Aboriginal culture over 4 weeks.

“It’s always been part of our cultural ethic and responsibility to look after country first and for Gumbaynggirr people, the ocean is our totem,” explains Chels Marshall, traditional owner, cultural systems ecologist and Director of Flying Fish Blue.

“My family totem is the red bass fish, and I’ve got cousins that are shark totem, and nephews that are stingrays. So kinship, Aboriginal ideology and worldviews all come in play and artists are showcasing fish they like to eat or have kinship with, or fish they admire.”

The art evolved from traditional owners in Nambucca (Nyambaga) working with Southern Cross University and the National Marine Science Centre on photographic inventories of marine species in Gumbaynggirr sea country. The result was an exchange of knowledge about names, meanings and uses of the species.

“Gumbaynggirr is a living language, so part of this was engaging with knowledge holders, language teachers, the language centre and language hub to record the cultural names of the species.”

The resulting works offer powerful cultural and emotional expression. The hope is that the exhibition will inspire all to connect with and care for the incredible biodiversity and ecosystems in the region.

Visitors to Culture Hub are invited to immerse themselves in the Jagun Yamarr soundscape and spend time in the chill space, with stories to delve into including books from Coffs Harbour Libraries. While experiencing the artworks and marine creatures on display, it is hoped audiences will move through the exhibition and absorb the spirit of Jagun Yamarr. 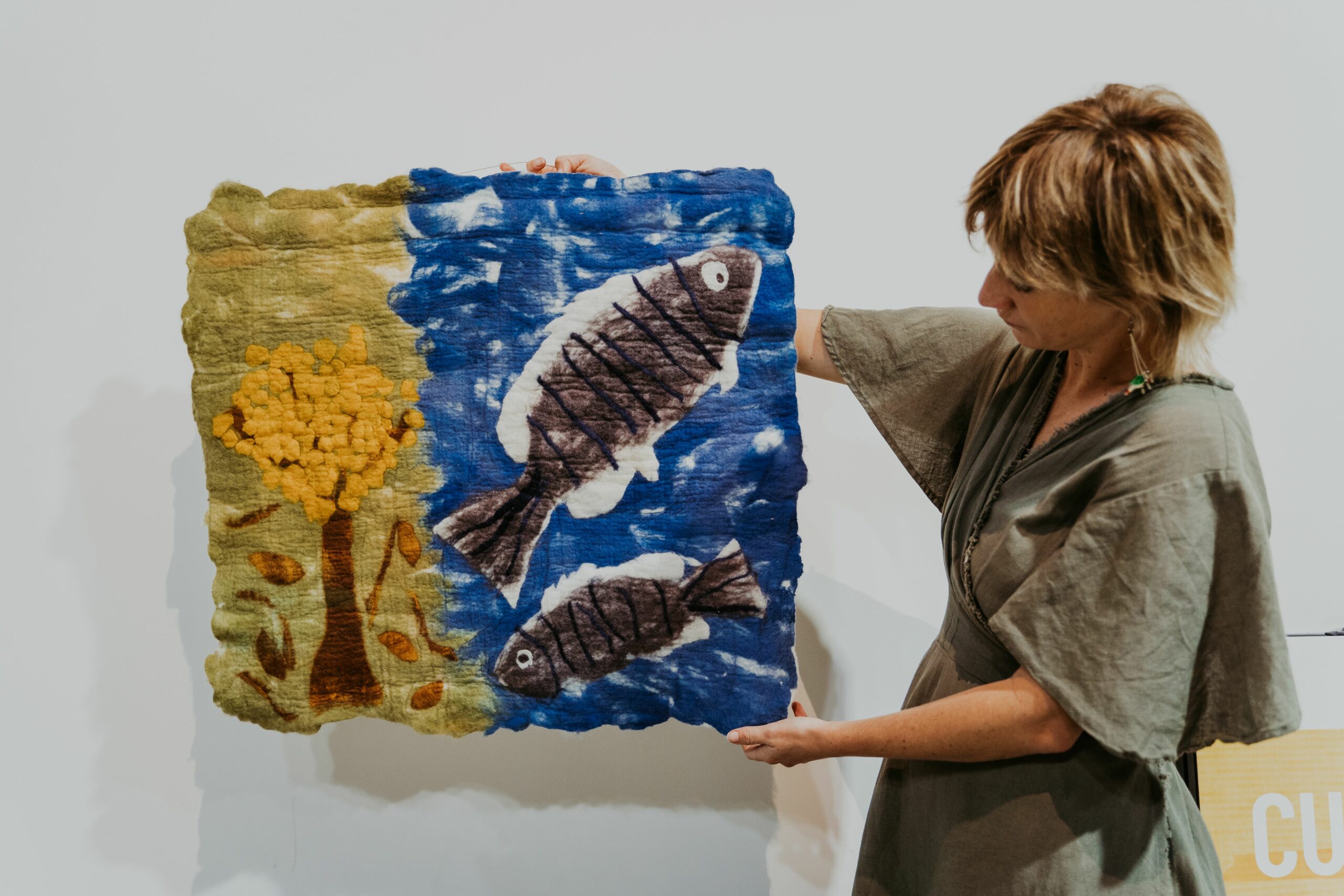 Ashleigh Frost with a felt work by Aunty Dot Edwards, titled The Season for Blackfish.

Programs Facilitator Ashleigh Frost says some of the works in the exhibition were created at workshops she ran in the community earlier this year.

“The workshop we ran in Valla was really special to be a part of, we worked with watercolour paints and sat down with lots of kids, aunties and elders telling stories and barbecuing while painting local fish species,” said Ms Frost. “The result is a beautiful poster that you can see at the exhibition and take home for $5.”

“We ran another workshop at The Art Dept in Toormina where 10 community members shared stories and experimented with different types of clay. Those works will also be on show at Culture Hub.” 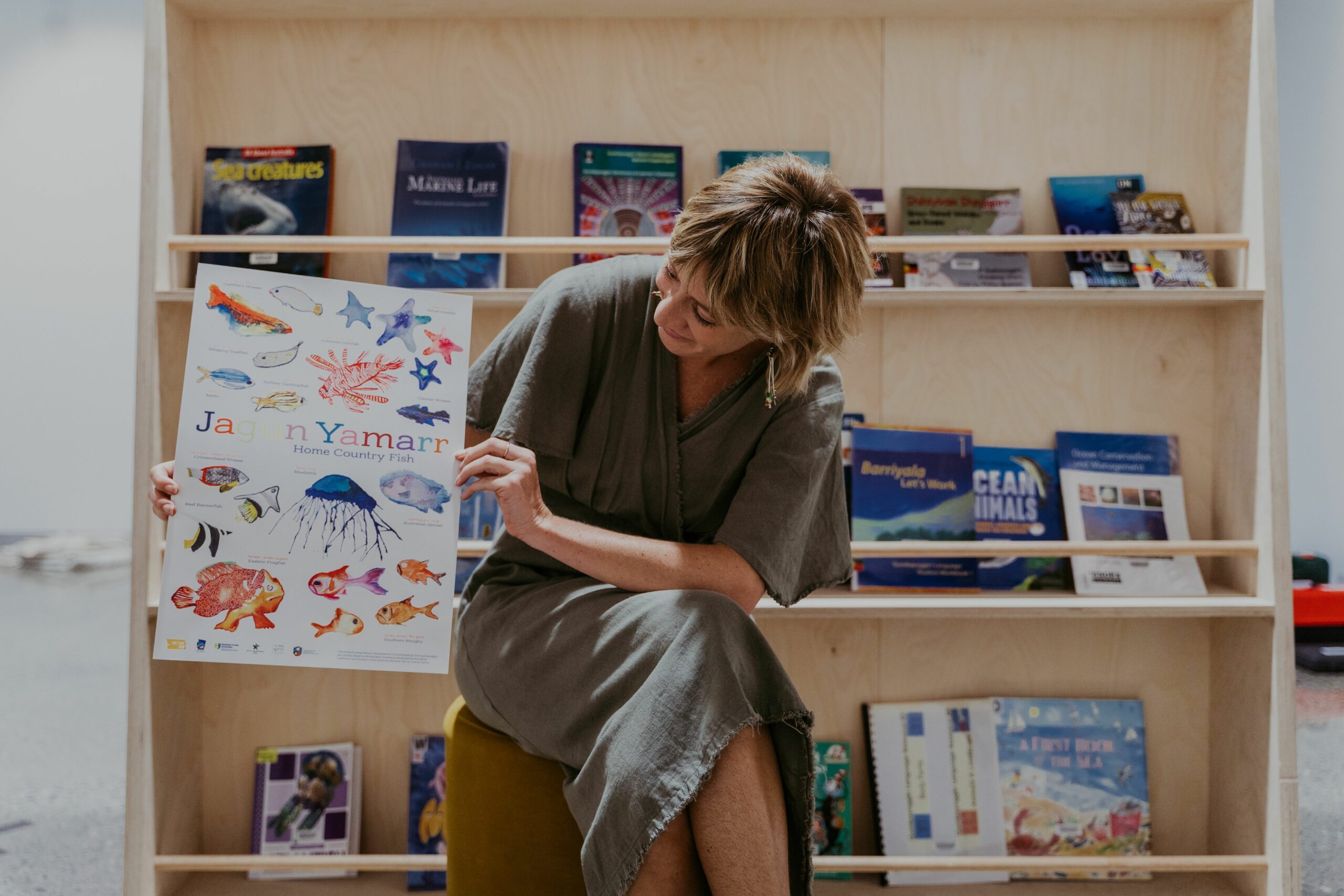 The Jagun Yamarr poster will be on show and for sale at Culture Hub from 20 March.

Coming up on April 3, Ms Frost, alongside a Gumbaynggirr artist, will lead Jagun Yamarr Kids Easter Workshops at Coffs Central where 8-12 year olds can paint their own home fish and marine world in watercolour. Bookings via eventbrite.

What’s on next at Culture Hub:

Sikh Museum Takeover: 24 April-29 May
In this community takeover, The Sikh Heritage Museum of Australia shares cultural artefacts, interactive displays relating to Sikh culture and a first-hand insight into how the culturally rich storylines of local Indian weddings have shifted over time. Alongside will be a special program of live music spanning Indian classical to Bollywood Groove.

Culture Hub is a cultural mix of Coffs Harbour Regional Gallery, Museum and Libraries in association with Coffs Central.