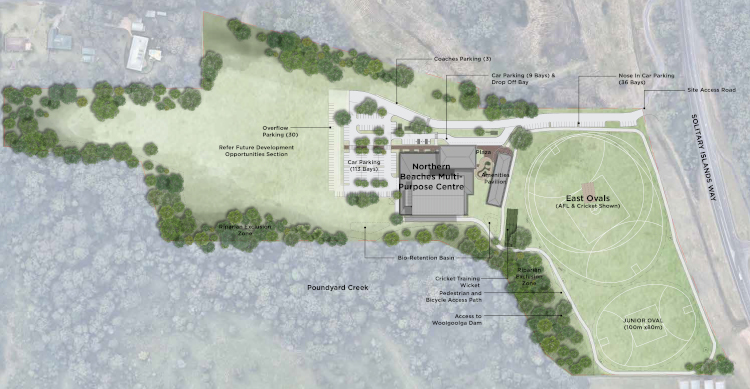 The new sports complex site in Woolgoolga is to be called Wiigulga Sports Complex in tribute to local Gumbaynggirr heritage and culture.

Wiigulga is the original name for Woolgoolga and refers to the black apple tree which is found locally and on the site. It is pronounced Wee-gill-gah.

“Honouring the Gumbaynggirr heritage and culture of the region has been a key consideration in all the decorative design work on the complex. This land was extensively used by the Gumbaynggirr people and in particular the Garby clan group.  It is now being developed into a world-class community facility that is going to be totally inclusive for the local community and all who use it, so finding the right name was very important,” said Coffs Harbour Mayor Councillor Denise Knight.

“Confirming the name of the site at the start of the construction phase of the project will ensure the new name is proudly displayed throughout construction and on all permanent signage into the future.”

Extensive consultation on the name was undertaken with a number of key Indigenous stakeholders including Council’s Yandaarra Aboriginal Advisory Committee, the Garby Clan Group Coffs Harbour District Local Aboriginal Land Council, the Garlambirla Guuyu Girrwaa Elders Corporation and Aboriginal community members who have a connection to the site, which was historically an important teaching trail for the community. All the stakeholders consulted recommended and endorsed the name Wiigulga Sports Complex.

Uncle Tony Dootson, Chair of the Garby Elders, said: “Jaajunggii (pronounced jaa-jung-gii and means ‘stand up’) jungaalay (pronounced as jun-galay and means ‘be proud be happy’).”

Designs by Gumbaynggirr artist Tulli Stevens from Mullaway have been chosen as the main design theme for the complex. Tulli won the commission with her work ‘Gawbarri’ which means ‘meet, get together, gather’ after Coffs Harbour City Council and the National Aboriginal Design Agency (NADA) collaborated on an Aboriginal design.

Work on the construction of the Wiigulga Sports Complex is expected to begin next month and be completed by late 2022.

The Wiigulga Sports Complex project was made possible through joint funding by the Australian Government, State Government and Coffs Harbour City Council. Stimulating the local economy through the construction phase and into the future is a key priority of all funding partners.