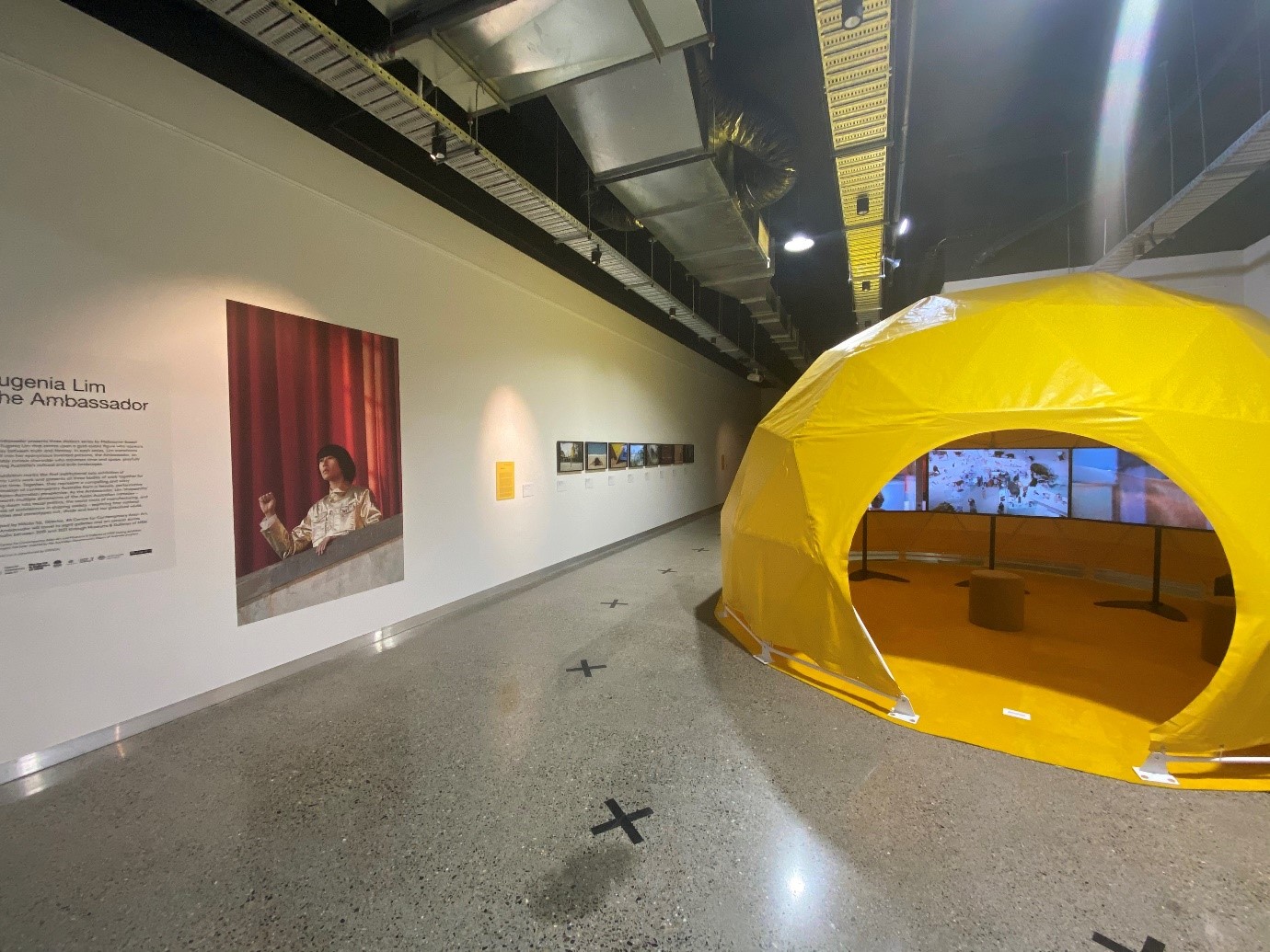 Coff’s Culture Hub has been transformed into a contemporary art installation by Eugenia Lim, giving the community a chance to immerse themselves in a truly unique multimedia exhibition until 16 January 2021.

It is an unusual exhibition for Coffs Harbour and features contemporary installation and video works alongside sculpture and photographic works, inviting visitors to explore ideas and shift their point of view.

The Ambassador is the first institutional solo exhibition of Eugenia Lim’s work and presents three bodies of work together for the first time. Together, they represent a compelling and witty examination of contemporary Australia from a female, performative and Asian-Australian perspective.

Her works drill down into themes of racial politics, the social costs of manufacturing and the role of architecture in shaping society, as she takes on the persona of ‘The Ambassador’.

Throughout the exhibition you will experience various sites and objects through the lens of her personal perspective as an Asian-Australian person, where she encourages you to likewise consider the role the narrator has on history, our interaction with sites of history and cultural identity, and the impact of mass production on our social lives.

The Ambassador brings together Eugenia Lim’s most recent trilogy of works. In this three-part project, Lim transforms herself into the Ambassador, a Mao-like persona who inhabits the space between truth and fantasy. In part one Yellow Peril (2015), Lim contemplates the fraught stories from the first wave of Chinese migrants seeking to make their fortunes in the Australian gold rush.

The 17-minute featurette transports Lim’s Ambassador to the Sovereign Hill theme park. Mixing in with a cast of modern-day visitors and historical theme-park actors, Eugenia’s lone Ambassador silently wanders through the site from dawn to dusk seeming twice removed – appearing as a literal and cultural relic from another time and place. The video draws careful attention to the experiences of migrants and the social costs of seeking fortune in a faraway land.

Borrowing its name from the renminbi (China’s currency) in part two The People’s Currency (2017) transforms the gallery into a ‘special economic zone’. Within this zone the Ambassador stands over her factory manufacturing counterfeit money and ceramic imitation electronic consumer goods. Lim invites the public to enter into ‘short-term employment’ as shift workers creating these goods on her factory floor. The collision of mass-production, menial work and counterfeit currency become strategies to evaluate the impacts of global capitalism – on those who seek their fortunes in the factories of China or ‘the workshop of the world’, and the global consumers of these ubiquitous and aspirational products.

The Australian Ugliness (2018), part three of the series surveys the role of architecture in marking a society and shaping national identity. The work pays homage to modernist architect Robin Boyd and his book of the same name. Boyd denounced the conservative, kitsch and decorative tastes of post-war 1950s Australia, warning against parochialism and insularity.

Building upon these ideas, Lim’s multi-channel video work sees the Ambassador lead a wide-ranging tour of iconic public and private spaces in Australian cities, inserting an Asian, female identity on screen and into the built environment of our cities – spaces still dominated and designed by white, male taste.

Throughout her journey, the Ambassador interrogates the tensions between globalism and localism, natural and the cultural and the importance of understanding Boyd’s featurism today in the Asian century.

‘Ultimately I hope that in some way, my work will help my audience encounter other people – no matter how ‘foreign’ in terms of gender, sexuality, race, religion or politics – as fellow human beings and citizens of the world.’ Eugenia Lim

Eugenia Lim is an important Asian-Australian voice in the visual arts landscape. Her artworks are thought provoking, stimulating and accessible. The Ambassador and associated programs provide an opportunity to facilitate cross cultural awareness and dialogue, and conversations around our collective community identity.

A total of six exhibitions are planned for the Culture Hub until July 2021 – including works from Australia’s most prestigious and infamous portrait competition, the Archibald Prize. That exhibition will run from 22 January until 6 March 2021, and will be shown in both the Hub and the Coffs Harbour Regional Gallery.

Council’s Culture Hub extends the city’s existing cultural facilities and provides locals and visitors alike with a taste of what will be possible within the new Cultural and Civic Space – a modern, safe and central place to learn, hangout and be inspired.