It’s 20 years since Woolgoolga Library opened its doors in Ganderton Street and the branch will be celebrating this special anniversary on Saturday, 28 November, with cupcakes and lots of fond memories.

“The community adopted Woolgoolga Library as their place to connect very early on,” said Digital Resources Librarian Surinder Kaur, who began working at the branch in 1997 and is still a familiar face to library members. “I ran Storytime for young families, and I’ve seen those same children now finish their HSC and complete university.”

Surinder believes the biggest change she’s seen in the past decades has been the advance in technology and the services now offered online – but the library remains a key and valued hub for residents and visitors.

“The moment there is a change in the community we become the first destination to ask for help,” she said. “In the last six months, we became experts on filling in the forms for Queensland border passes. Since the blueberry industry boomed in the last 10 years, we have become the first destination for completing employment forms. Every winter, we also see visitors using our services – especially grey nomads from Victoria.”

(Pictured above at the opening in 2000 are library staff Di Ward, Anne Burnett (Chief Librarian), Karen Johnson and Surinder Kaur).

Originally opened in 1965 in River Street, the Woolgoolga Library had a stock of 1,111 books, only operated seven hours a week and was run for the first 12 months by Country Women’s Association (CWA) volunteers. Closing in 1979 to start a new bookmobile service, the library reopened in 1987 in a cramped space in the Boundary Street mud brick buildings.

The current, purpose-built library attracted much praise from the public in 2000 when it opened with longer opening hours, a much wider collection of resources, a children’s area and meeting room facilities.

“The most striking feature were the stained glass windows and artworks by Woolgoolga Art Group which showcased local creative talent and celebrated life in Woolgoolga at the time,” explained Surinder. “The community is proud of its colourful Sikh community and I remember at the opening, I came dressed in my Panjabi suit with my harmonium and a Bollywood dance was performed. The Chief Librarian, Anne Burnett, decided to have signs in both English and Panjabi languages and I translated them.” 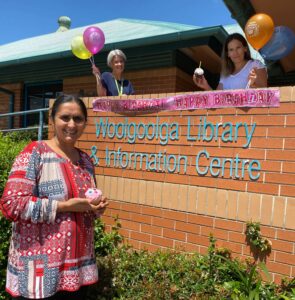 Twenty years on, the library has evolved to offer much more than books, expanding its services to provide eBooks, eAudio, eMagazines, online newspapers, films and a new range of information databases to tap into.  Countless families enjoy Storytime, author talks and education workshops. Not to mention the many people who rely on the library for free access to computers and wifi. COVID-19 restrictions have seen a recent move to online events until face-to-face events can return.

Celebrations on 28 November will be marked with the unveiling of a special bird bath for the library garden and a cupcake – under COVID-19 rules – for members of the public who want to come along from 10am until 12noon to share their memories.