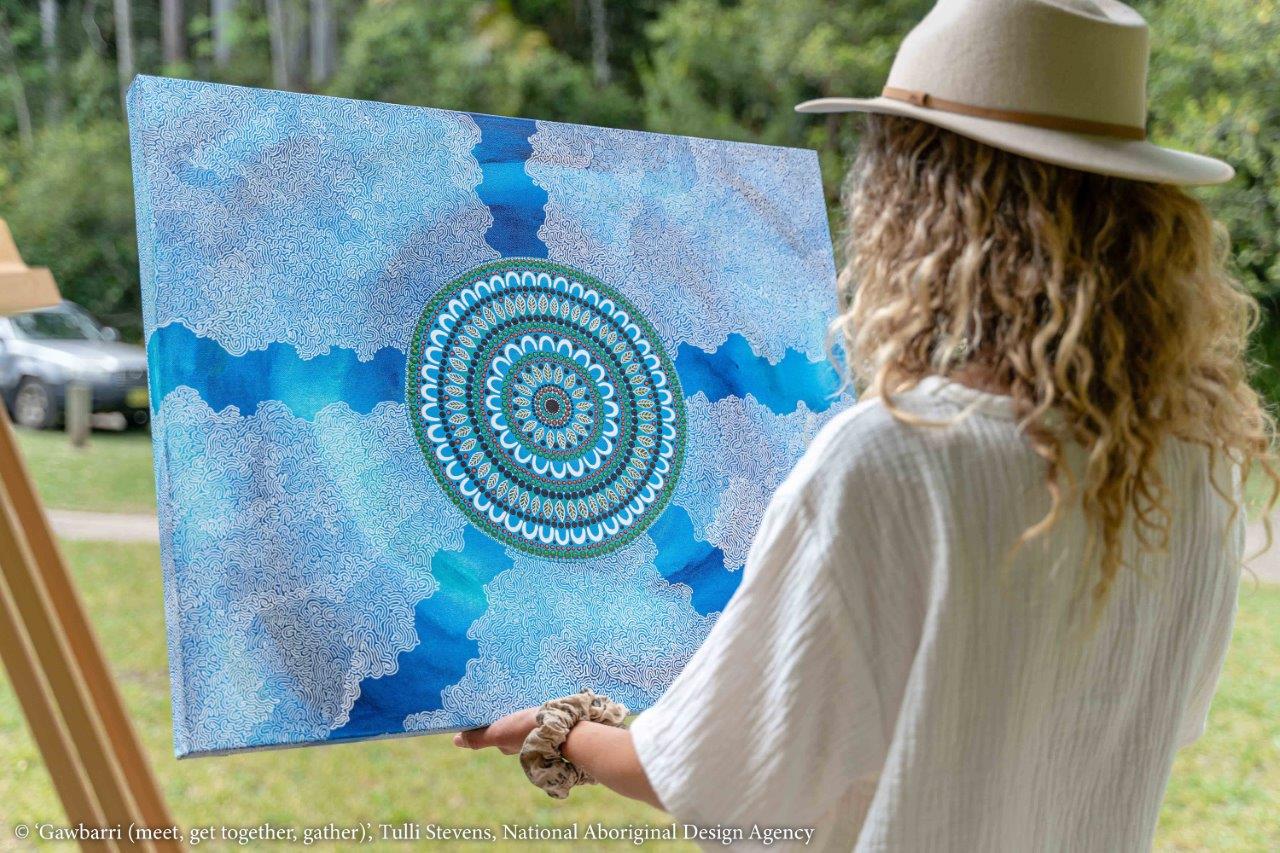 A design by Mullaway artist Tulli Stevens that celebrates Gumbaynggirr culture has been chosen as the main design theme for the West Woolgoolga Sports Complex.

“The new community complex is going to be a focal point for the Northern Beaches and beyond and we wanted to ensure that the Gumbaynggirr heritage and culture of the region would be honoured in the design which is such an important part of the welcome of the new facility,” said Coffs Harbour Mayor Councillor Denise Knight. “It’s wonderful that we were able to share this news during NAIDOC Week.”

Tulli Stevens won the commission with her work ‘Gawbarri’ which means ‘meet, get together, gather’ after Coffs Harbour City Council and the National Aboriginal Design Agency (NADA) collaborated on an Expression of Interest for an Aboriginal design.

Jane Tavener, NADA Manager, said: “It has been a real pleasure to work alongside Coffs Harbour City Council and the Populous team on this project, and we are so excited that Tulli’s artwork was selected to be used throughout the new building.  Being included from the beginning of the design process has shown respect for the artist’s work and the significance of the site to the Northern Gumbaynggirr people. This project is an example of best practice in working with Aboriginal artists, their work and their community.”

Tulli has lived in Mullaway her entire life and her paintings reflect family, community, and the complex, elemental beauty of patterns in nature. She is strongly influenced by nature and her connection to Country.

Tulli Stevens said: “Gawbarri pays homage to beautiful Woolgoolga, where the rainforest meets the sea. It consists of one single continuous line throughout the ocean inspired background. The dot painting in the centre represents the rainforest and bush tucker, the Wiigul (black apple tree) with the fruit being foraged. The continuous line representing the walking tracks, journeys and stories held on the land of the proposed site. The pathways lead to the centre, bringing the community together to a meeting place.” 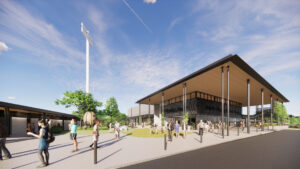 Populous architect Belinda Goh said: “The artwork has beautifully captured the design story of Gumbaynggirr Country, where the rainforests meet the ocean and how WWSC creates a place for gathering.”

“We know that local residents really value facilities that contribute to the quality of life we enjoy on the Coffs Coast, and Council is very focused on providing community facilities that demonstrate excellence in design on all levels. Populous have done an exceptional job incorporating Tulli’s work,” said Nikki Greenwood, Council’s Group Leader City Prosperity. “The West Woolgoolga Sports Complex is going to be a truly world-class community facility for the Northern Beaches.”

The Complex is expected to be completed by late 2022.