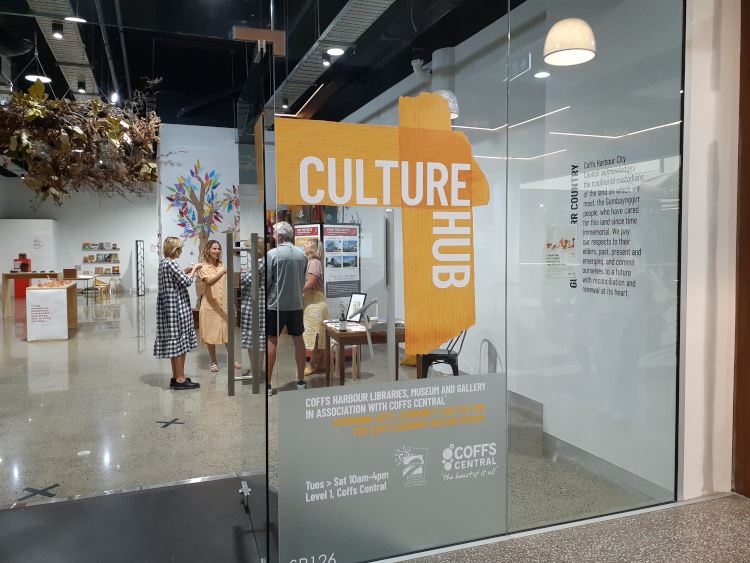 A temporary, inner-city, ‘Culture Hub’ that aims to become a vibrant focal point for art, community and culture in the Coffs Coast region has been launched in Coffs Central.

A partnership of Coffs Central and Coffs Harbour City Council’s Library, Museum and Gallery (LMG) section, the Culture Hub will bring a fascinating range of arts and cultural activities right into the heart of the City Centre.

“The pop-up exhibitions and events that Coffs Central has previously hosted on Level One have proved to be hugely popular – and the new Hub is going to offer even more cultural happenings for people of all ages to enjoy,” said Coffs Harbour Mayor, Councillor Denise Knight. “Being able to pop in and soak up an amazing cultural experience while you’re out and about in the City Centre makes it so much more accessible for so many more people. It’s going to be a fantastic attraction for both the arts and local businesses.”

Culture Hub will be a place to share our local stories with the first exhibition – ‘Creative Recovery Projects: The Bushfires’ – opening on Tuesday, 27 October, and running until 14 November 2020.

“It is an exhibition of works by students from Coramba Primary, Nana Glen Primary and Ulong Public Schools in the Orara Valley and showcases their artistic responses to the terrible bushfires of 2019 that they went through,” said Ashleigh Frost, LMG Programs Coordinator. “The works are the result of an outreach program – the Creative Recovery Project – spearheaded by Council’s Regional Gallery and Museum as part of our ongoing bushfire recovery initiatives.

“The Project included creative workshops and activities for students with Gumbaynggirr Elder Uncle Mark Flanders and Art Therapist Emma Gentle to help them work through their experiences of the November bushfires.

“Each school became a vital way for children and families to connect with each other and maintain familiar routines after such a terrifying time. So we worked with the children in their school communities to help them reflect, process and recover – and the artworks clearly reveal how raw and vivid an experience it was. They’re also fascinating because they show a very different view of what’s important to a child during a time like that, as opposed to an adult.”

A total of six exhibitions are planned for the Culture Hub until July 2021 – including works from Australia’s most prestigious and infamous portrait competition, the Archibald Prize. That exhibition will run from 22 January until 6 March 2021, and will be shown in both the Hub and the Coffs Harbour Regional Gallery.

Culture Hub extends the city’s existing cultural facilities so that national exhibitions like the Archibald can be seen in Coffs Harbour. It provides locals and visitors alike with a taste of what will be possible with the new Cultural and Civic Space – a modern, safe and central place to learn, hangout and be inspired.