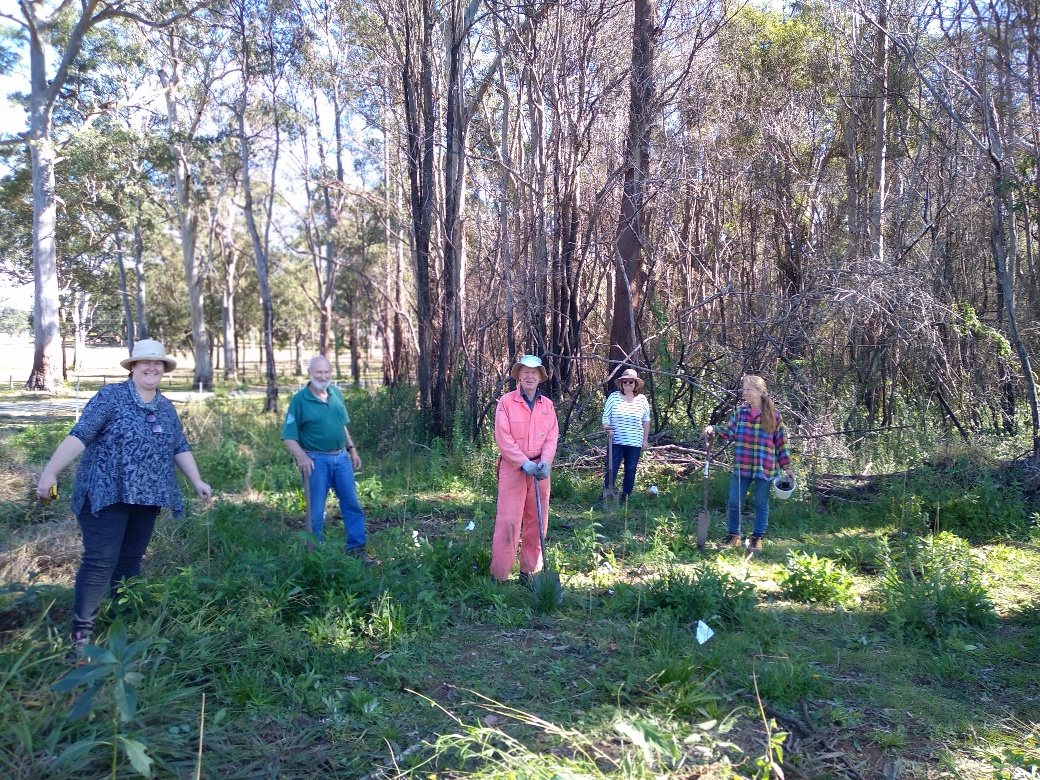 Volunteers from Nana Glen Landcare are helping bring the Coldwater Creek Travelling Stock Reserve (TSR) back to life after it was decimated in the 2019 Liberation Trail bushfire that hit the Orara Valley.

The Landcare group had been working hard on the block, which is on the corner of Ellems Quarry Road and Orara Way, since 2018 as it was heavily weed infested. After gaining permission to manage it from Local Land Services – which looks after all TSRs in NSW – the group successfully applied for Environmental Levy funds from Coffs Harbour City Council and began uncovering the historic stock reserve.

“We had contractors come in and carry out weed control and weed control training, we created a walkway that led to a variety of lovely native trees and furniture was installed along the walkway,” said Deb Mason, President of Nana Glen Landcare. “A carpark was created at the site and, importantly, we also felled some camphor laurel trees as they are a damaging weed.”

“We found a little area with different types of vegetation such as lemon and persimmon and near a man-made area to capture water for stock, so we realised it was the site of a camp that had been used by generations of people droving the stock,” added Ms Mason.

Unfortunately, the Liberation Trail fire bit the block really severely and some of the really old swamp mahogany trees were lost. But the furniture on the walkway survived and the Landcare team have since organised nest box installation, water stations for wildlife and are slowly regenerating the area. There are also plans to install interpretive signage about the stock reserve.

Melinda Brooks, Council’s Community Recovery Officer, and other Council staff helped the Landcare volunteers plant 20 trees at the site recently on National Tree Day. “It’s a fascinating site both historically and environmentally and Nana Glen Landcare are doing a fantastic job,” she said.

Nana Glen Landcare has since gained a licence to look after adjoining Crown Lands and will be applying for Bushfire Recovery Grants for further works.

Council will also be including the Coldwater Creek Travelling Stock Reserve on the Coffs Coast Tourist Trail Map when the Landcare group is satisfied it is ready.

“Helping encourage tourists to visit Nana Glen and the wider Orara Valley is a key part of the bushfire recovery work Council is undertaking as it was identified as a priority by the local community,” said Fiona Barden, Council’s Section Leader Industry Destination Development. “The Coldwater Creek Travelling Stock Reserve is something that will definitely attract visitors to the area.”