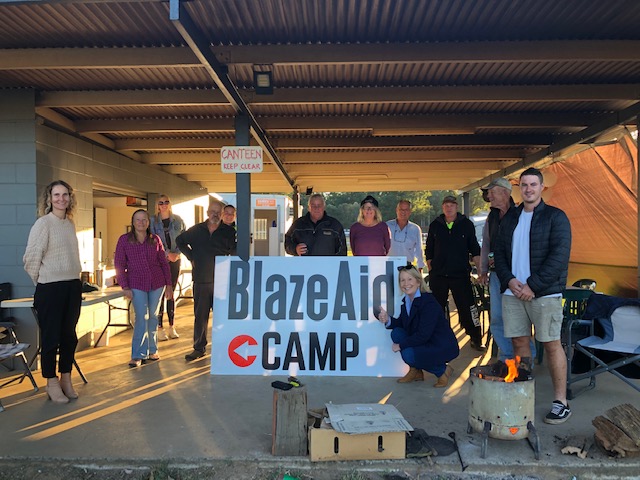 BlazeAid volunteers who have been helping fire and flood-affected residents in the Orara Valley since February have been thanked in person by Coffs Harbour Mayor Councillor Denise Knight.

“The bushfires were absolutely devastating, but the way people have helped those who lost their homes and businesses has been very uplifting and the Blazeaid volunteers have been amazing,” said Cr Knight who visited the Blazeaid Camp at Glenreagh to show her appreciation as the remaining volunteers begin packing up the camp, which was home to 80 volunteers at its busiest.

“The Glenreagh camp alone had people volunteering from Queensland, South Australia, Victoria and even from overseas. Most importantly, in the time they’ve been here, they cleared 35 kilometres of fencing for the community and rebuilt a total of 45 kilometres.

“Having someone provide assistance with these practical tasks after such a disaster is always helpful, but the people of the Orara Valley also had the comfort of knowing that people cared enough for them to leave their normal everyday lives and come here to help – and I wanted to show my own appreciation for their generosity. I and the community say a big thank you.”

The volunteers undertook the fencing and other works in Glenreagh, Nana Glen, Upper Orara, Karangi, Dairyville, Coramba, Moleton and Lowanna. They worked on 36 fire-hit properties and 13 that were affected by the later floods.

BlazeAid volunteers offer practical labour and work with families and individuals in rural Australia after natural disasters such as fires and floods. Equally importantly, the volunteers also aim to help lift the spirits of those who have been impacted. BlazeAid volunteers often work in a disaster-affected area for many months helping rebuild the local communities.

Funding for the camp was obtained from Resilience NSW.

For more information on Blazeaid and its work, go to: blazeaid.com.au