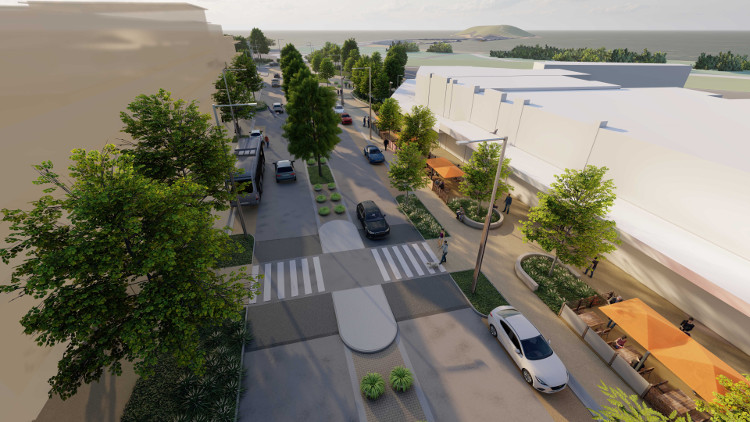 Transforming the Jetty Strip into a vibrant, pedestrian-friendly and welcoming gateway to the Harbour and Marina Precinct of the city is the aim of a plan to upgrade this popular dining and entertainment destination.

Public input into the draft Coffs Jetty Strip Streetscape Plan is being sought from tomorrow (Wednesday, May 20) until June 30. A video fly-through and relevant information on the proposal can be found at haveyoursay.coffsharbour.nsw.gov.au/draft-coffs-jetty-strip-streetscape-plan where people can also provide their comments and ideas.

“The Jetty Strip has been a very popular place to dine and meet up for locals and visitors for many years,” said Sharon Smith, Coffs Harbour City Council’s Section Leader Local Planning. “This section of Harbour Drive provides an important traffic route and parking area, but increasing traffic volumes over time have eroded the enjoyment of dining and using the area.

“We’re seeking to help balance vehicle, pedestrian and parking needs by creating a more pleasant environment along the lines of the very successful First Avenue in Sawtell.

“New developments relating to large land parcels along the northern side of the Strip – and the State Government’s plans for the Harbour area – have now provided the impetus to reimagine the Jetty Strip Streetscape for what it could be – a vibrant and well connected public place.”

The area covered by the plan stretches along Harbour Drive from Edinburgh Street to Orlando Street and then north to Collingwood Street.

Lengthy discussions have already been had with key stakeholders in the Jetty Strip Streetscape, including landholders and businesses. The design ideas that have emerged include:

“Parking is also an important consideration and the plan includes changes to parking that will actually increase the available spaces in the immediate area through creating extra central parking bays in the wide part of Collingwood Street where it meets Orlando Street and areas around the Jetty Shopping Village,” added Ms Smith.

For more information on the draft Plan, or to provide your ideas and comments, go to haveyoursay.coffsharbour.nsw.gov.au/draft-coffs-jetty-strip-streetscape-plan or look out for the Coffs Jetty Strip postcards in local cafes and shops.