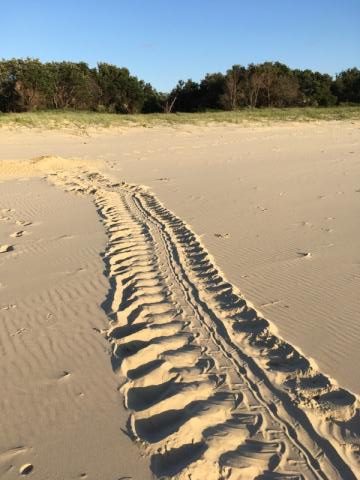 New turtle nests have been discovered on local beaches and people are being urged to be extra vigilant and obey signage and regulations regarding dogs in public places and vehicles on beaches.

Marine turtles are a threatened species and it is vital to protect them at this time of year when they are vulnerable and should not be disturbed.

Endangered Little Terns are also nesting locally. Sites have been signposted and the public is also being asked to respect those areas.

Council is asking people to help reduce any potential disturbance by keeping dogs controlled and on leash – even in the off-leash areas of Hearnes Lake Beach and Boambee Beach where signposted.

Similarly, anyone driving their 4WD vehicles on permitted beaches are asked to reduce speed and obey any signage.

In permitted locations, drivers still need to be aware that vehicles must drive below the high tide mark, or as close to the high tide mark as possible. Driving on sand dunes is strictly prohibited. The maximum vehicle speed is 25kph within 100 metres of any other beach user.

Anyone who sees any evidence of turtle tracks or nests (of any species on the beach) is asked to contact the National Parks and Wildlife Service on 6652 0900.

For more information on: