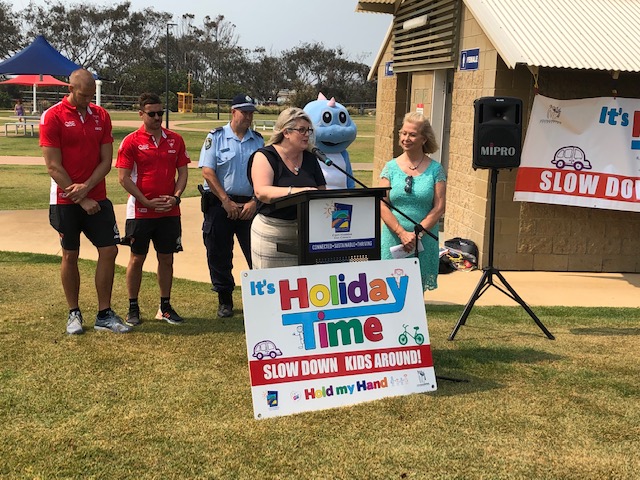 Coffs Harbour City Council is very proud to be partnering with the Little Blue Dinosaur Foundation to launch the Holiday Time: Slow Down, Kids Around road safety campaign across the area.

Colourful signage with pedestrian road safety messages has been installed at key locations across the local government area to remind drivers to slow down and be vigilant during the holiday period.

“This is a very important initiative and I hope our community and visitors take notice of the signs and slow down these school holidays,” said Coffs Harbour Mayor, Councillor Denise Knight.

“The signage not only encourages drivers to slow down on our roads, but aims to encourage adults to hold the hands of any children under their supervision when they are near or crossing our roads.”

The Little Blue Dinosaur Foundation was started by Michelle and David McLaughlin, following the death of their four-year-old son Tom in a pedestrian road accident on the Central Coast in 2014.

“No parent should have to go through what Michelle and David McLaughlin have with the loss of their son Tom. I admire and applaud their passion for promoting child road safety initiatives and education to avoid tragedies like this happening again,” added Mayor Knight, who was joined at the launch at the Jetty Foreshores by Michelle McLaughlin, CEO and Founder of the Little Blue Dinosaur Foundation, Jeff Kaplan, Communications and Media Consultant for the Little Blue Dinosaur Foundation, and Sydney Swans Players Jake Lloyd and Sam Reid who are in Coffs for their Pre-Season Community Training Camp.

The campaign is now operating in over 61 local government areas in four states across Australia and will continue to expand to other coastal and holiday destinations in the future.

Foundation Founder and CEO Michelle McLaughlin said she was delighted that Coffs Harbour City Council is getting behind the initiative ahead of the busy school holiday period.

“We lost our precious son, Tom in the blink of an eye.  We don’t want this to happen to anyone else.  The cost is just too high. That’s why the ‘Holiday Time, Slow Down Kids Around’ message is so important,” Mrs McLaughlin said.