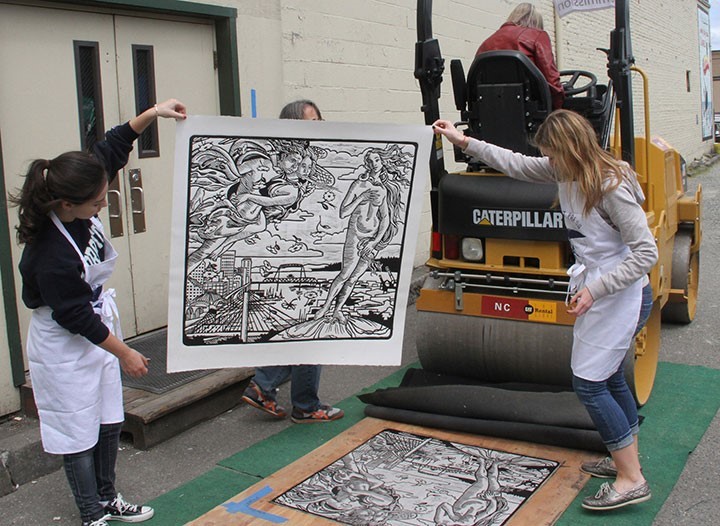 School students, shorebirds and a steamroller appear to be an unlikely combination – but they’ve been brought together in a wide-ranging art and environmental program centred on Coffs Harbour Regional Gallery.

The culmination of the project will be a day of ‘printmaking theatre’ on Saturday, November 30, when the students’ lino-print designs will be ‘printed’ using a steamroller in a special session at Castle Street Carpark in Coffs Harbour.

‘The Overwintering Project’ is a partnership between local schools, local artists and art groups, the Gallery, National Parks and Wildlife Service (NPWS) and BirdLife Australia. It is supported by Create NSW’s Audience Development Fund, a devolved funding program administered by Museums & Galleries of NSW on behalf of the NSW Government and BirdLife Australia.

“Basically, we’re working with Year 9 and 10 students from Woolgoolga and Toormina High Schools to raise awareness about the migratory shorebirds who make their home on the Coffs Coast over summer,” said Gallery Curator Jo Besley. “Every year, up to 38 species of shorebirds migrate to the warmth of Australia for their non-breeding season. Their southern habitat in Australia is particularly significant as it is where they spend the greatest portion of the year and put on the weight they need to fly back north and breed.

“We kicked off the project with Woolgoolga High students spending the day in local shorebird habitat at Moonee where they worked with local artists, NPWS Rangers and BirdLife Australia volunteers to learn about the threats to shorebirds, once plentiful on the Coffs Coast but now threatened or endangered.

“Over the project, the students will create lino-prints of our local shorebirds with the help of six weeks of art workshops facilitated by the Gallery. Their artworks will then form the heart of ‘The Overwintering Project’ exhibition at the Regional Gallery from December 6, 2019, to February 8, 2020. Through this exhibition, Coffs Coast residents will become aware that we are not the only ones who depend on our beautiful shoreline for health and wellbeing – global shorebirds need it for their survival.”

The Coffs Harbour Regional Gallery exhibition will form part of a national ‘Overwintering Project’, which includes a folio of 260 prints of shorebirds by artists from every state and territory in Australia, as well as New Zealand.

The Gallery’s exhibition will also include the ‘Wall of Wings’ project created by local artists and art groups.

To see steamroller printing in action, take a look at this video: https://www.youtube.com/watch?v=MFzvNPJn0n8