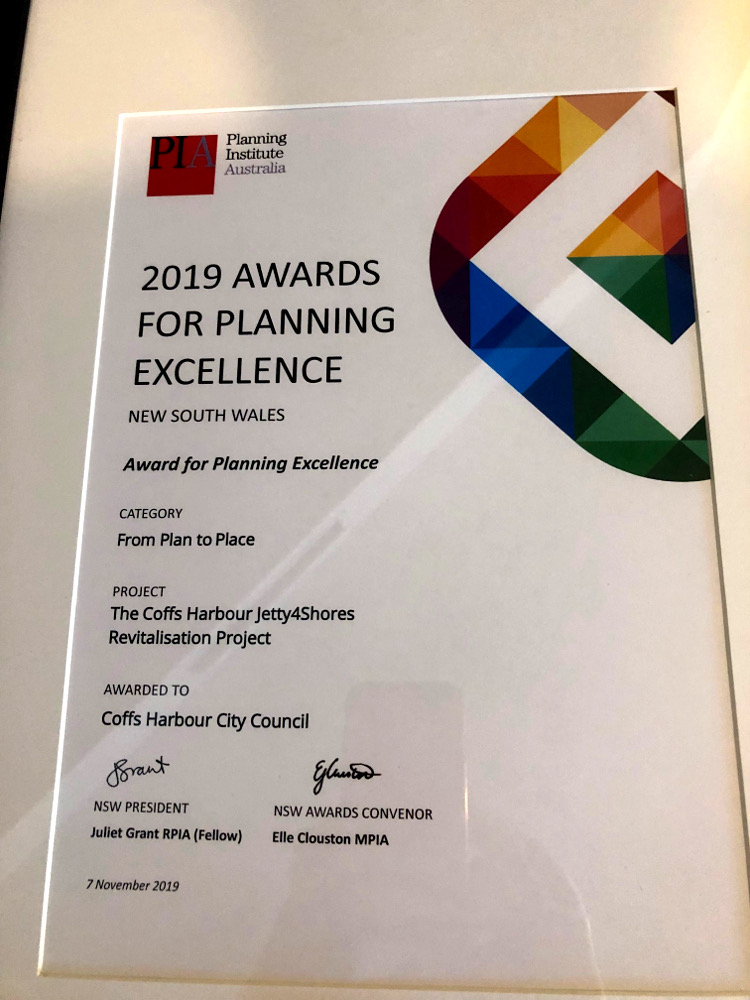 Coffs Harbour’s Jetty4Shores Project has been recognised once again for planning excellence at the Planning Institute of Australia (PIA) NSW Awards 2019.

The Project took out the ‘From Plan to Place’ category which is awarded for an initiative that achieves significant, positive changes through planning.

In 2014, the stakeholder engagement for the same project won the Award for Planning Excellence – Public Engagement and Community Planning in that year’s PIA awards.

“The Planning Institute is the top planning body in Australia and for them to choose the Jetty4Shores Project is fantastic,” said Coffs Harbour Mayor, Councillor Denise Knight.

“We always knew that this was a top quality project – and its popularity with locals and visitors shows we got it right. But having further state-wide recognition from top planning experts is an amazing outcome.

“I’m extremely proud of all those involved in the project – particularly the community which worked so closely with Council to achieve a result that is now the envy of many other communities throughout NSW.”

The Jetty4Shores project was the result of a long period of vigorous community consultation that began in 2013. Construction of Stages 2-4 began in April 2017 and was officially opened in October 2018. The Australian Government contributed half of the $9.2m cost through its National Stronger Regions Fund.

The project has re-positioned the Coffs Harbour Jetty Foreshores as an attractive area for recreation and a range of community, social and sporting events -as well as a high quality regional tourist attraction.

Significant social and economic benefits are now being experienced by Coffs Harbour and the region as a result, including more visitors and greater tourist expenditure.

The project has won several other awards to date, including the 2018 NSW Country Division Urban Design Award – Jetty4Shores Urban Revitalisation Project (RAIA) and the Minister for Local Government’s 2018 Award for Innovation in Local Government Engineering (IPWEA).