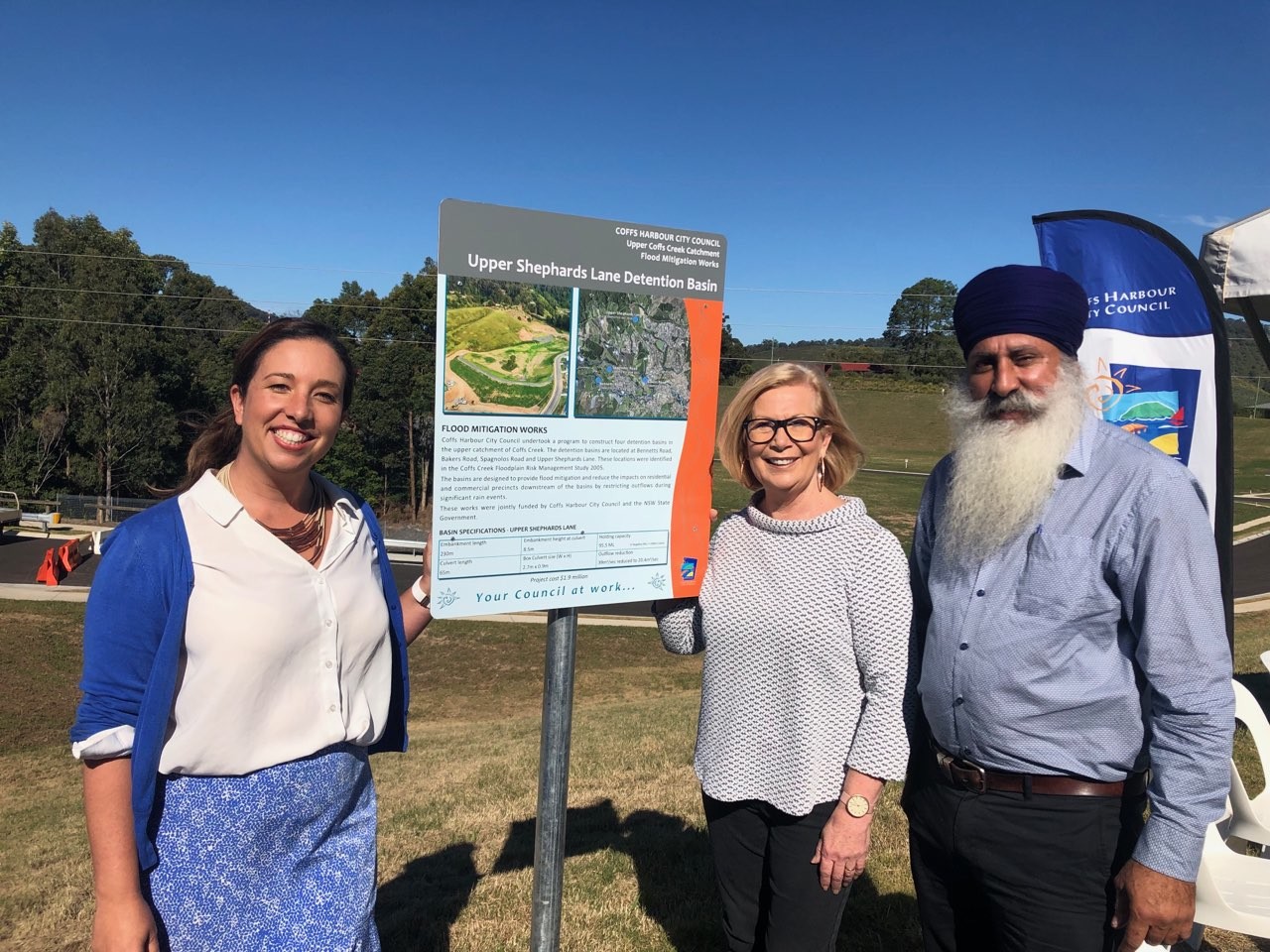 Ten years after the floods that devastated Coffs Harbour’s city centre in 2009, I was very pleased this week to be at a ceremony to mark the completion of the fourth and final major flood detention basin for the Coffs Creek catchment at Upper Shephards Lane.

As it’s been a while since then, I thought I’d take this opportunity to remind residents, particularly those who’ve moved here in the interim, about our Flood Mitigation programme.

Essentially, four large detention basins form the centrepiece of $20m Flood Mitigation Programme which began immediately after the 2009 floods. The basins are located in Bakers Road, Bennetts Road, Spagnolos Road and Upper Shephards Lane. They operate by capturing the water run-off created during a storm event and then releasing it slowly into the creek so that the impact of the deluge is reduced downstream.

Funds for the Programme came from a special rate variation, introduced following the 2009 storm, loan funds and grants from the NSW Government.

Unfortunately, the very geographical features that make this area such a wonderful place to live – the hills around us, the creeks and waterways – do make us vulnerable to flood events.

So, since 2009, Council has been very focused on trying to reduce the impact of future flooding on the community and our economy. As well as the four detention basins, we put in place an early warning system directly linked to the SES and Bureau of Meteorology which has received very positive feedback from the emergency services.

Plus we’ve made improvements to the northern tributaries of Coffs Creek to ease flow and upgraded the CBD stormwater infrastructure. In addition, we’ve looked at what we can do from a planning point of view to reduce the potential for damage to businesses and homes from flooding.

But we’ve never claimed to have a silver bullet.

Flooding is – by its very nature – unpredictable and the basins can’t solve the problem alone. But they will certainly ensure that flood levels in a 100-year event are significantly lower downstream – so that people and their property are as safe as they can be.

I just wanted to congratulate everyone in Woolgoolga – particularly local organiser Lisa Nichols – on winning the best R U OK Community Award in Australia.

It’s really heart-warming to see recognition for the wonderful community spirit they have shown with regards to supporting people coping with mental health issues through R U OK and Fluoro Friday.