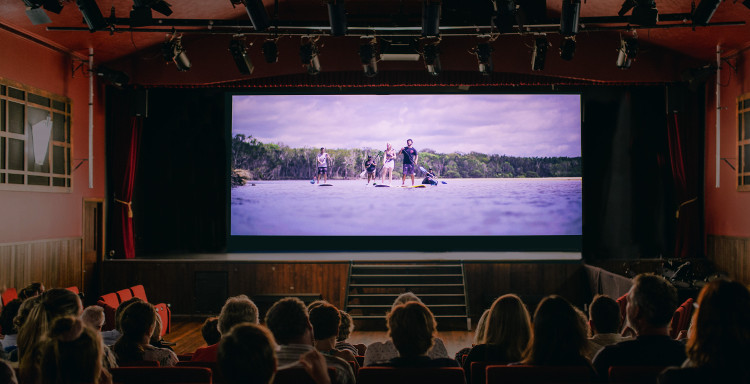 A new TV ad campaign that highlights the stunning natural landscapes of the Coffs Coast alongside the attractions of the area as a stylish, growing regional centre was launched last night at the Jetty Memorial Theatre to a packed audience of local tourism operators.

“In this campaign, we’ve built on the previous ‘Create Your Paradise’ messaging, with the story evolving to show a sophisticated view of our growing regional city, one that has connection at its heart.  It showcases the ability of the destination to connect with carefree childhood memories – a nostalgic theme to evoke a sense of wonder and discovery of today’s Coffs Coast, its natural beauty and its relaxed, chic lifestyle.

“We want our audience to feel as though they can escape to this special piece of paradise, to refresh their souls and connect with life’s simple treasures – nature, family, friendships.  We present Coffs Coast – naturally connected.”

Featuring just some of the spectacular locations, destination dining and retail outlets found throughout the Coffs Harbour and Bellingen areas, the TV commercial stars a wide range of local residents and businesses.

It highlights the importance of connections for the Coffs Coast such as:

Aimed primarily at young couples and families living in regional NSW and South East Queensland, as well as Sydney, Melbourne, Brisbane and the Gold Coast, the campaign will be broadcast across both states from May 2019. It will initially also feature in digital and print advertising through Tigerair and Australian Traveller.

“A key aim of the campaign is to encourage local operators to use the Naturally Connected TV ad and Council’s other promotional material to showcase the Coffs Coast through their own marketing,” added Mrs Barden. “At the end of the day, the campaign is all about helping to grow our local tourism industry by working together.”

The new TV commercial was produced by Simon Portus from Sawtell company, Headline Productions, and the soundtrack was written especially for the commercial by Dorrigo musician Phebe Starr.