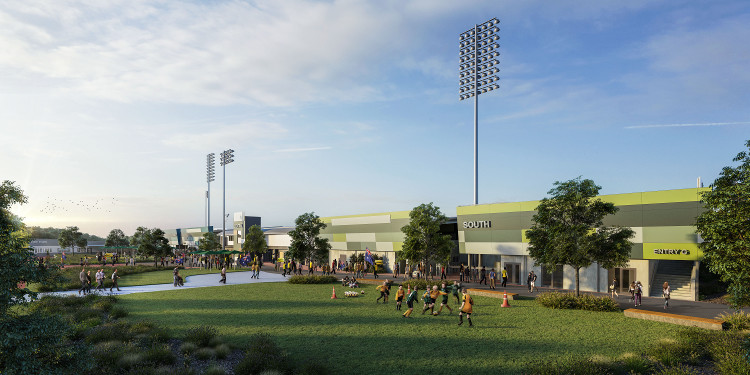 The new look C.ex Coffs International Stadium is outstanding. As the Advocate said earlier this week – “Coffs Harbour can officially lay claim to being the home to one of the finest regional sporting precincts in the country”.

I absolutely agree. The new North and South Grandstands, the Hub and the new café have totally transformed the appearance, and experience, of arriving at the stadium.

The aim has always been to ensure C.ex Coffs International Stadium remains the absolute go-to regional venue for an enormous range of premier sporting events. This major upgrade will help increase the number of people coming to the region overall – which will further boost the local economy.

But just as importantly, it is a fantastic new facility for all local residents.

It will provide even better facilities for the huge numbers of school events and local sports groups who use the stadium all year round.

And it is now a fully accessible facility, which I’m particularly pleased and excited about. Providing spaces and venues that all residents and visitors can enjoy and feel safe in is a real focus of this council.

The whole project is another great example of what can be achieved when different levels of government work together and pool resources to provide maximum benefit to the community.

It’s also worth highlighting that over 30 local subcontractors worked tirelessly to get us to this point, plus the project received vital financial support from the C.ex Group, Infracraft Pty Ltd and Key Employment Ltd.

Three key local sports are the foundation tenants to the Hub – AFL North Coast, Cricket NSW and North Coast Football – and the Hub Café is being run by Jonathan Oates, the owner of Zest in Sawtell.

The new grandstands opened on time for the National Touch League championship, which brought together the best Touch Football players from across Australia to Coffs Harbour.

So they were the very first to enjoy the state-of-the-art player change rooms, coaching and media boxes and spectator amenities.

I am sure they will go back home and rave about the wonderful C.ex Coffs International Stadium and the equally wonderful Coffs Coast and its people.