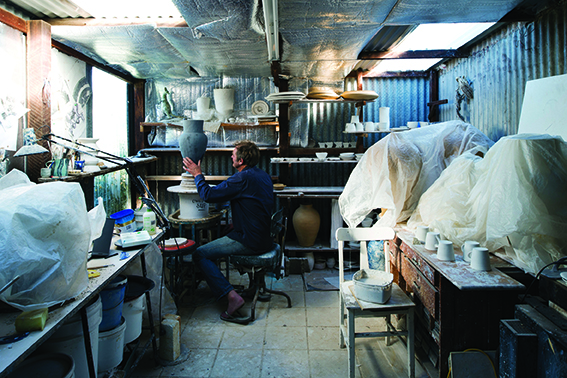 Surfing and ceramics are not usually found in the same sentence – unless you are Australian artistic icon Gerry Wedd.

Wedd, whose career has spanned more than 40 years, made a name for himself creating subversive or unlikely images on everyday pottery objects. With an encyclopaedic knowledge of surfing, this five-time South Australian surf champion has been able to do what most people only dream of – making his two great loves his career.

“Who else would reproduce a fourth century classical Greek black ware jar but with an image of 1960s world surf champion Midget Farrelly?” said Jo Besley, Regional Gallery Curator. “Even if you think you don’t know Gerry’s work, he worked for Mambo from the 1980s until 2006 and designed clothing, posters, ceramics, metalwork and surfboards, so you’re bound to have seen at least one of his distinctive ‘scratch board’ designs.

“His sense of humour – from inserting political statements into apparently staid willow pattern pieces to teapots incorporating the lyrics of Joni Mitchell – has been the thread throughout his career. He is not afraid of being called kitsch and happily claims that he couldn’t ‘make a tasteful pot if you paid me’.”

In 2013, artistic centre of excellence JamFactory launched the first in a series of solo exhibitions celebrating the achievements of South Australia’s most outstanding and influential craft and design practitioners. Each exhibition presents leading practitioners with significant national and international profiles and considerable influence in their chosen field.

The fourth in this series is ‘Gerry Wedd: Kitschen Man’. The exhibition is touring to 12 venues nationally, including Coffs Harbour Regional Gallery, with the support of the Australia Council’s Contemporary Touring Initiative. It will be hosted at the Gallery from March 8 until May 4 2019.

Gerry Wedd has long used the images of pioneering surf photographer John Witzig on his ceramic objects. Witzig’s photographs of surfing in the 1960s and 70s now have the status of cultural icons.

In an accompanying exhibition at the Gallery – ‘Ripped Off’ – Gerry and fellow Mambo artist Robert Moore, along with Jon Campbell, Ozzie Wrong and John Witzig himself, delve into Witzig’s extraordinarily rich archive to create new artworks exclusively for Coffs Harbour Regional Gallery.

Entry is free, but bookings are advisable. Book via www.coffsharbour.nsw.gov.au/gallery

Pictured above is Gerry Wedd in his studio.