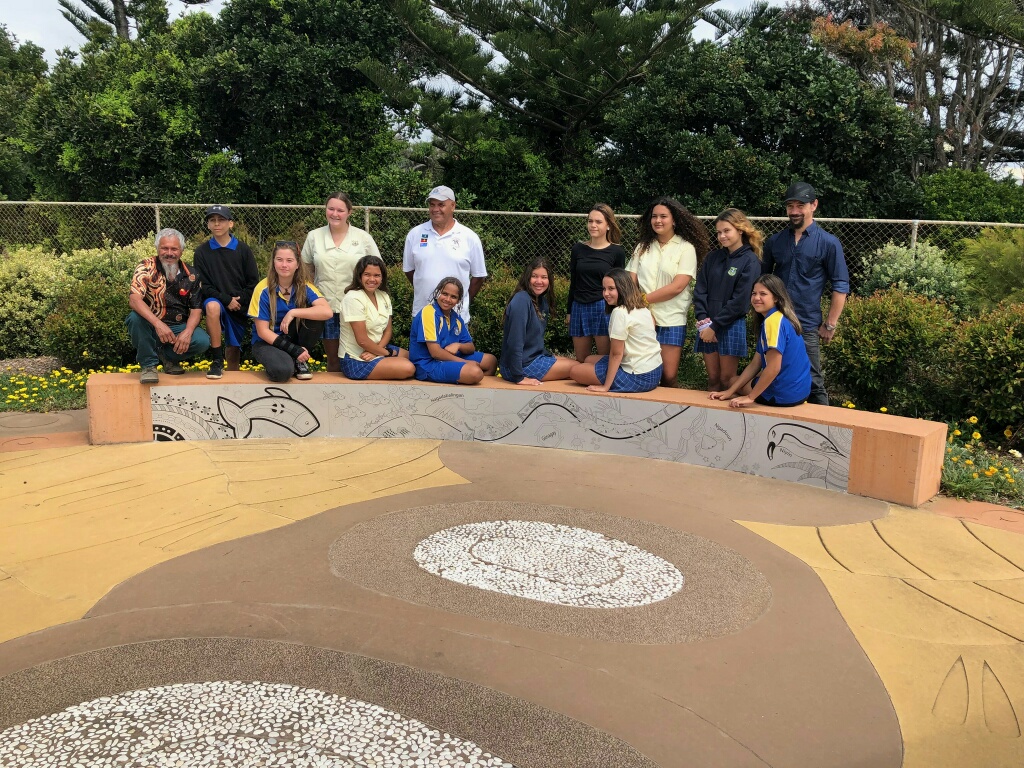 The talent of young Aboriginal artists was celebrated at the Jetty4Shores today (25 October 2018) when new interpretive signage and the Gumbaynggirr artworks at the site was officially launched by Coffs Harbour’s Deputy Mayor Councillor Tegan Swan.

Nine Aboriginal students from three local high schools took part in an art workshop mentored by local Gumbaynggirr artists Brentyn Lugnan and Alanna Shorter and created artworks that have been translated into designs and sculptures placed throughout the Jetty4Shores Project site.

These included yarns on how the Old People would sing for dolphins to come in and bring the mullet with them, the importance of the sea as a food source, how Muttonbird Island is sacred and how the sea turtle is special to the Gumbaynggirr people. They also spoke of the significance of the timber industry, the Jetty area itself and Happy Valley. The young artists also used these stories as inspiration for their work.

The Elders’ dreamtime and origin stories feature as key panels in the new signage along with images created by the youth artists.

“The artworks and sculptures at the Jetty4Shores represent and celebrate how we all connect to the environment and the ocean,” said Cr Swan. “The Gumbaynggirr stories add incredible depth and value to our understanding of the foreshores’ significance to the traditional owners of the land.

“It’s wonderful that, through this interpretive signage, we can pay respect and homage to this beautiful spot and what it means to the Gumbaynggirr people now – and for those who were here before. Everyone who visits will leave with a totally new insight into this incredible space and why it is so important to recognise and celebrate our local aboriginal culture.

“I’d like to thank the Gumbaynggirr Elders and the artists for giving us these gifts.”