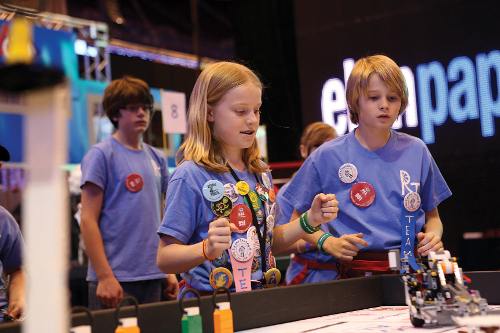 Lego® battlebots will go head-to-head next month in the very first Lego® League Qualifying Event ever held in Coffs Harbour.

First Lego® League is a competition challenging students aged 9 to 16 to think like scientists and engineers. It is designed to expose teams to problem-solving using science and engineering solutions.

The competition is supported by Coffs Harbour City Council’s 6 Degrees. Acting Section Leader Fiona Barden said they were excited to be supporting this opportunity to foster interest in Science, Technology, Engineering and Maths (STEM).

“By engaging young people in a fun event like this, we can encourage them to be excited about science, engineering and technology at the same time as they are learning skills that may lead to a fantastic future career,” she said.

“Working in teams in a high-pressure Robot Games environment also gives them self-confidence and grows communication and leadership skills.

“We saw this as a fantastic learning opportunity for our local student community and next generation of leaders.”

Winning teams from the regional qualifying event in Coffs Harbour will advance to state competitions, with 70 successful teams being invited to the National Championship in December.

The top teams from the Australian National Championship 2018 will receive invitations to compete internationally, including exclusive invites to the World Championships in the USA in 2019.

FIRST® Robotics is an internationally acclaimed robotics program that inspires a passion for Science, Technology, Engineering and Maths in young people. Australian teams have enjoyed success at the FIRST® World Championship Tournament each year from 2006 to 2014. Worldwide there are 32,600 teams made up of 350,000+ students from nearly 80 countries. 64,000+ Mentors and 66,000+ event Volunteers and Affiliate Partners donate their time to make FIRST® possible.