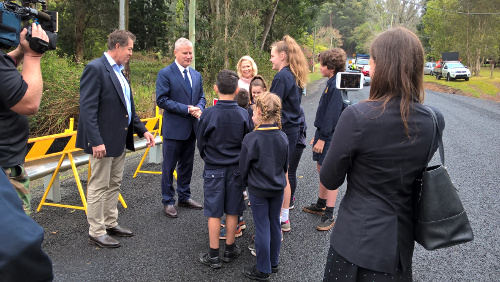 I had a great start to the week on Monday when – after welcoming back all the players, officials and supporters of the FFA National Youth Championships for Boys to the C.ex Coffs International Stadium – I went along to the opening of the brand new Bardens Bridge on Crossmaglen Road.

We were lucky enough to have the Deputy Prime Minister Michael McCormack there at the opening, along with Luke Hartsuyker MP and, most importantly, the whole of Crossmaglen Public School who treated us to a lovely version of ‘A Million Dreams’.

The new $450,000, two-lane bridge was jointly financed by Council and the Federal Government’s Bridge Renewal Program and replaced a failing 100-year-old timber structure.

Like so many of our local bridges, Bardens Bridge is not on one of the busiest roads in the Coffs Harbour local government area, but it’s a vitally important link for residents and businesses in the Crossmaglen Valley.

So I was thrilled that we were able to provide the local community with a brand new bridge with the support of the Australian Government.

Let’s make sure we get the bypass the community wants by ensuring the State Government hears your views. I’d encourage everyone to go along to the remaining Community Consultations on the Bypass at Coffs Golf Club. Have your say – this is important.

It was a magical and very professional performance, but what was most amazing was the fact that everyone involved – including the director, stagehands, designers – are all under 18.

What fantastic talent we have here in Coffs Harbour. Congratulations to the whole company. I’m already looking forward to your next show.

I hope to see many, many of you at today’s Curryfest. Congratulations to the enthusiastic and dedicated team of volunteers who have organised the whole thing and done another great job.

Well done to all the local gardeners who went away with a prize at this year’s perennially popular Spring Garden Competition. As well as presenting prizes I was delighted to accept two awards on behalf of Council – one for the roundabout in Moonee Street and another for the Airport garden. It was lovely to get such recognition for the hard work of Council staff.