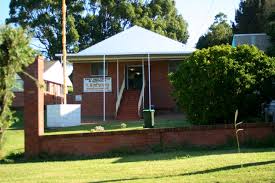 The First Sikh Temple in Woolgoolga – the earliest example of a purpose-built Sikh temple in Australia – is to be designated as a place of local historical interest.

Opened in 1969, the Temple in Hastings Street was an important symbol of the acceptance of Sikhs as an integral part of the Woolgoolga community.

The First Sikh Temple’s website, www.firstsikhtemple.com.au, says” ‘The establishment of the Sikh community would not have been possible without the welcome, tolerance and encouragement of the host community.

‘There are anecdotes of the host community assisting the Sikh migrants in business, financial affairs, correspondence and encouragement to maintain their culture and religion. In fact there were three members of the host community on the committee which built the First Sikh Temple of Australia in Woolgoolga.’

The First Sikh Temple is also interesting architecturally as it is the only example of a Temple design in NSW using an adaptation of an Australian vernacular ecclesiastical style for a religion that was new to Australia.

Back in April this year, Council resolved to support a Planning Proposal to update the Coffs Harbour Local Environmental Plan (LEP) 2013 by including the First Sikh Temple as a local heritage item.

Permission to proceed was given by the NSW Department of Planning and Environment and, following public consultation, last night Councillors agreed to finalise its inclusion as a heritage item in the LEP.

“Woolgoolga’s Sikh community has been instrumental in the development of the town and its unique character,” said Coffs Harbour Mayor, Councillor Denise Knight.

“I’m glad we’ve been able to play a part in having such an important part of Woolgoolga’s Sikh heritage recognised for future generations.”

The Sikh population in Woolgoolga became established during the 1940s. Most of the earliest migrants were farm workers from Punjab in India who had originally settled in northern NSW or north Queensland, but moved south during WWII because war-time labour shortages led to a relaxation of the previous ban on non-European labour in the banana industry. After the war, they were also able to buy property and lease banana plantations.