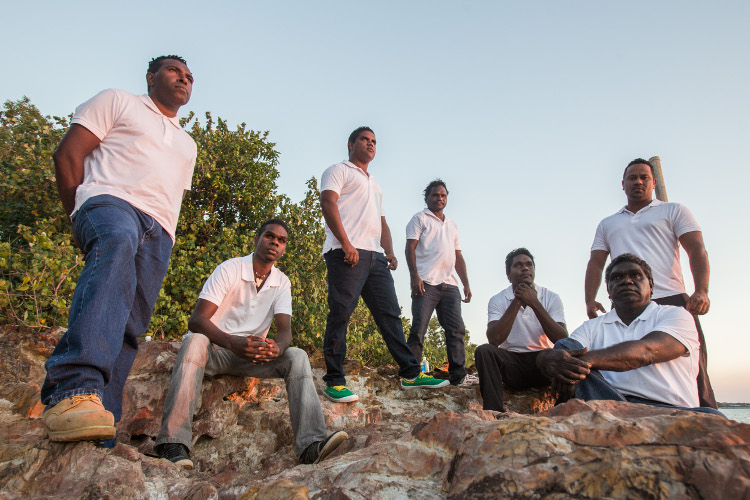 Ahead of their performance at the Jetty Memorial Theatre on September 13, the members of B2M – a seven-piece band from the Tiwi Islands – will be holding a workshop with residents from the Junaa Buwa! Centre for Youth Wellbeing to help them turn their life experiences into song.

Junaa Buwa! Centre for Youth Wellbeing is an intensive residential rehabilitation centre focussing on helping 13 to 18 year olds overcome the issues that have led to them being caught up in the juvenile justice system.

Participants from the centre will work with B2M members to create conversation around these issues, tease them out and turn them into lyrics. Music will then be mixed in with the lyrics for a final performance of the song at the end of the workshop.

Telling stories through song is central to B2M’s (Bathurst to Melville) performance. In this first national tour, B2M are performing ‘Mamanta’ – a musical and multimedia celebration of the past and the future of Tiwi culture and identity.

“Drawing on a strong tapestry of stories, including our own songlines that have never left the Tiwi Islands before, Mamanta is unlike anything ever seen. We have never created a show that shares our experience this fully,” said band member Jeffrey ‘Yello’ Simon.

“Like the paintings that reflect the depiction of country, our songlines demonstrate our journeys, our history and our community,” said Yello.

Formed in 2004, B2M are strong Tiwi men who write, record and perform music that transcends cultural, social and geographic boundaries. Their music is unique and infectious, filled with beats, chants and harmonies that showcase their ability to carry a positive image of their people and culture.

“For us, the message that B2M shares is the most important facet of our music. Steering clear of catchy love-songs, we focus on bigger issues, like drug and alcohol abuse, mental health and understanding identity,” added Yello.

For tickets and information for the B2M ‘Mamanta’ performance on Thursday, September 13, visit the website jettytheatre.com or contact the Jetty Theatre Box Office on 02 6648 4930.