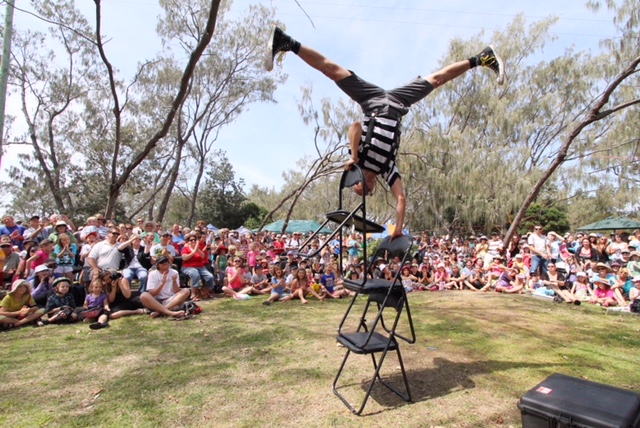 I can’t believe it’s already September! Where is the year going? But that does mean we’re only a few weeks away from enjoying the fabulous Buskers Festival once again.

I’m pretty sure we all look forward to the Festival, which will run this year from October 2-7, and we’re promised an “action packed six days of fun for the whole family”.

Organiser John Logan tells me there’s going to be plenty of fun, some new venues, a swag of international and Australian acts, as well as a few locals and some outrageous surprises.

Headlining will be a group from Amsterdam – The Flying Dutchmen – who are on their first ever visit to Coffs. Other acts include Clown Loto from Japan, Sports Suzie from New Zealand, acrobats Popeyed and Son from Tasmania, ‘Kiki the Kazadorian Ambassador’ described as Dame Edna and Borat’s love child, as well as a host of other acts from Brisbane, Sydney, Adelaide and the Gold Coast.

A highlight will no doubt be the Kid’s Day which is going to be at a new location complete with a four-lane giant slide and roller coaster.

Make sure you take plenty of gold coins with you when you’re out and about that week.

We were over the moon at Council after winning the ‘Most Innovative Regional Council’ at the inaugural WAVE awards in Wagga Wagga. The awards aim to highlight the best in innovation practice and recognise those ‘making a wave’ of difference in regional Australia.

It was great to see the work we do in the technology and innovation sectors recognised like this.

We were one of the first cities in Australia to develop a Digital Strategy back in 2011 and were also named in the Intelligent Community Forum as one of the world’s Smart21 Communities in 2014.

Probably the best-known initiative we do is 6 Degrees – which includes multiple co-working spaces, the Start-Up Coffs Coast competition, the Coffs Coast Digital Enterprise Programme and the upcoming Incubator Programme.

Being a regional centre, we recognise that startups and local entrepreneurs are vital to our future prosperity and the Industry team at Council works hard to nurture and support the great talent to be found on the Coffs Coast.