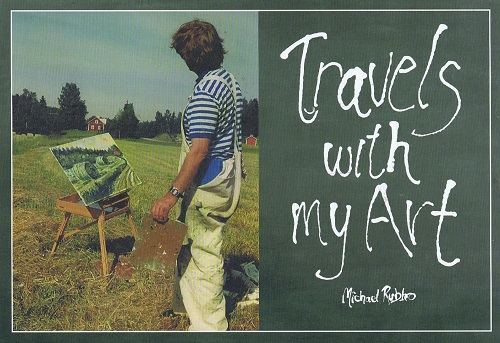 Emmy Award-winning film-maker, author, cycling advocate and artist Mike Rubbo will be at the Harry Bailey Memorial Library on August 30 to talk about his book ‘Travels with my Art’ which has a direct link to his most successful film ‘Vincent and Me’.

“In the late 1980s, I made a feature film called, Vincent and Me, which won an Emmy,” says Mike, who is from Sydney, but spent 30 years living in Canada before returning home in 1996 to become ABC’s Head of Documentaries.

“For that film, I painted 30 copies of van Gogh’s paintings, the originals not being accessible. I’d never much painted in oils before and so it was a real challenge. But the results turned out well and they led me to realise that I loved Vincent’s style of painting, and that I wanted to get outside in the sun and the wind like him, have breezes buffet my canvas, bugs land in the sticky wet paint, and pick up on the force fields that are out there in nature and which he talks about in his letters to his brother, Theo.

“I had come to a turning point in my life. Painting plein air as it’s called, was so much fun that I discovered, that I liked it almost as much as film making.

“Now, many years later since I’ve kept virtually all the paintings I did in the Impressionist way, I’ve been able to put them together in this book to see what they add up to, to see what I’ve discovered.

“I guess the main discovery is that every painting has a story to tell. Often we don’t know why an artist did a particular work. But I’m able to tell the stories and do so in the book.”

Mike will be selling copies of his book at the end of the evening, which will run from 6pm-8pm. He is also happy to sign copies, but he has gone one step further than most authors and places an original drawing in each book along with his signature and dedication.