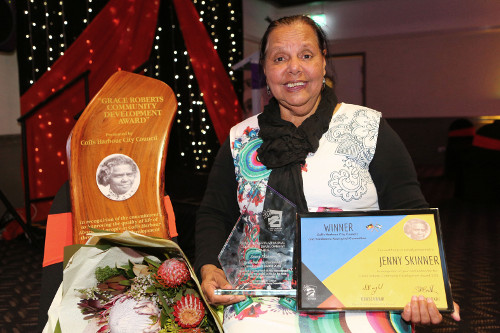 A dedicated and inspirational community ambassador and role-model in the Aboriginal community in Coffs Harbour has taken out the top honour at the 2018 Grace Roberts Community Development Awards presentation, held at the C.ex Coffs Club on Friday, July 13 2018.

The Awards recognise the contribution that local Aboriginal and Torres Strait Islander people make to the community. They are named in memory of Grace Roberts, a local Aboriginal woman who had a positive and lasting impact on the Coffs Harbour community in helping to improve the quality of life for local Aboriginal people.

The 2018 Grace Roberts Community Development Award was presented to Aunty Jenny Skinner for her commitment to supporting numerous community organisations and volunteering her time to better her community and support in any way she can. From driving buses to transport community members to events to attending conferences and meetings to promote her community and share her knowledge of Gumbaynggirr culture, Aunty Jenny is a much respected and inspirational woman in the Aboriginal community who is a mentor and role-model who has positively touched the lives of many.

Other award winners were:

“The Grace Roberts Awards presentation has become one of the highlights of the annual NAIDOC Week celebrations for our city,” said Coffs Harbour City Councillor Paul Amos, who presented the award to Aunty Jenny Skinner on the night.

“Grace Roberts is remembered as a powerful leader and role model in our community, committed to the betterment of local Aboriginal people.

“It’s great to see successive generations following in her footsteps. Our congratulations go to this year’s award winners – and to all the nominees – for their efforts and achievements in the Coffs Harbour community.”