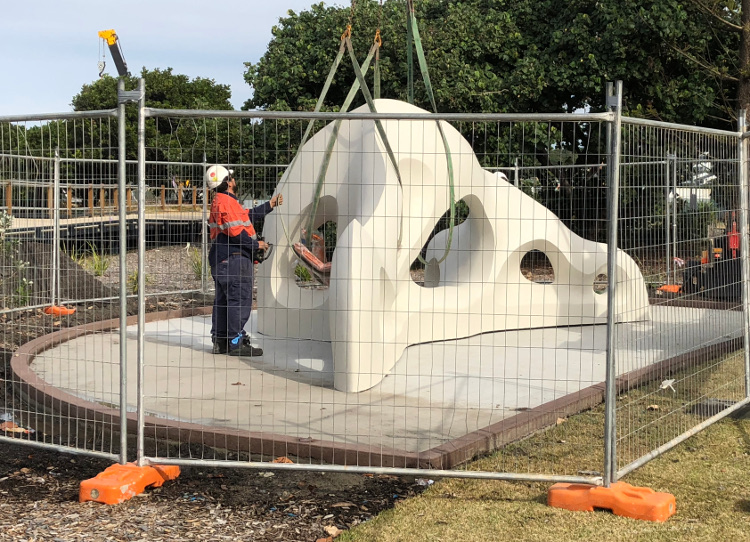 ‘Cloud Reef’ by John Vanderkolk is the latest and last major interactive sculpture to adorn the Jetty Foreshores.

“The intention behind Cloud Reef was to be a reflective playscape of the ocean and the coast; clouds, reef, views,” says the artist, whose recent public sculptures include major collaborative works in China, Turkey, Nepal, California and Cambodia.

“The piece is designed with children in mind, to be a children’s playground, a place for exploration, allowing them to explore the unfamiliar.

“I didn’t want to create something obvious, like a slide or a swing, this was to be an adventure into the unknown, allowing and developing exploration and imagination.”

‘Cloud Reef’ is loosely styled on a beach-weathered whale vertebra in John’s studio. From ground level it appears as a number of curved walls pierced with various sized and shaped holes and crawl spaces for kids to explore.

It has been installed near the stage in the market area with a view to the ocean. It will join John’s other foreshores sculpture – ‘Pod’ – which represents a pod of whales and has already proved popular with young visitors to the foreshores.

It will also complement other existing large works at the foreshores by other local designers including Gumbaynggirr artist Brentyn Lugnan and Emma Louise Davies. Their works stand alongside a variety of designs and smaller sculptures in wood, metal and concrete created by students from local high schools.

“All the works that have gone into the transformed foreshores are already popular – particularly with children which was always the aim,” said Coffs Harbour Mayor, Councillor Denise Knight. “They have all really reinforced the idea of connecting the space to our wonderful and unique environment. I will be very excited to see John’s latest work in place.”