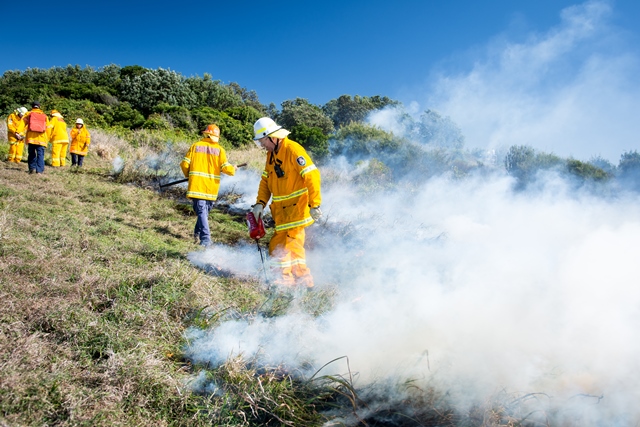 THIS BURN WILL NOW TAKE PLACE FROM 8AM ON WEDNESDAY 8 AUGUST 2018.

An ecological and cultural burn is due to be conducted on Boambee Headland.

The burn will be a joint operation between the National Parks and Wildlife Service (NPWS), Coffs Harbour City Council, NSW Fire and Rescue and Rural Fire Service  and Gumbaynggirr firefighters from the Durrandar Wajarr team.

A successful burn was conducted on Macauleys Headland on May 17.

Ahead of the Macauleys Headland exercise, Mark Flanders, Senior Cultural Heritage Officer and local Gumbaynggirr Elder from the Coffs Harbour Local Aboriginal Land Council explained that indigenous people all along the north coast of NSW actively burned many of the coastal headlands in the past.

“There was a variety of cultural and practical reasons why Gumbaynggirr people used fire. These included creating open camp sites and areas for communication along the coastline.

“Fires also cleaned up the camp site after use and encouraged fresh growth for hunting purposes. It also allowed an open area for the practice of traditional ceremonies.

“Frequent use of fire by Gumbaynggirr people maintained a high diversity of species in native grasslands and controlled regeneration of some woody species.”

The project is supported by the NSW Government’s Environmental Trust and aims to empower and build capacity among traditional custodians to participate in bush regeneration through the burning of native grasslands on coastal headlands.

Locals and visitors are being urged to help native grasslands on headlands by keeping to the formed tracks as these areas are prone to invasion by weeds and disturbance by people.

Anyone interested in helping look after such areas more directly can also join a local Landcare group.