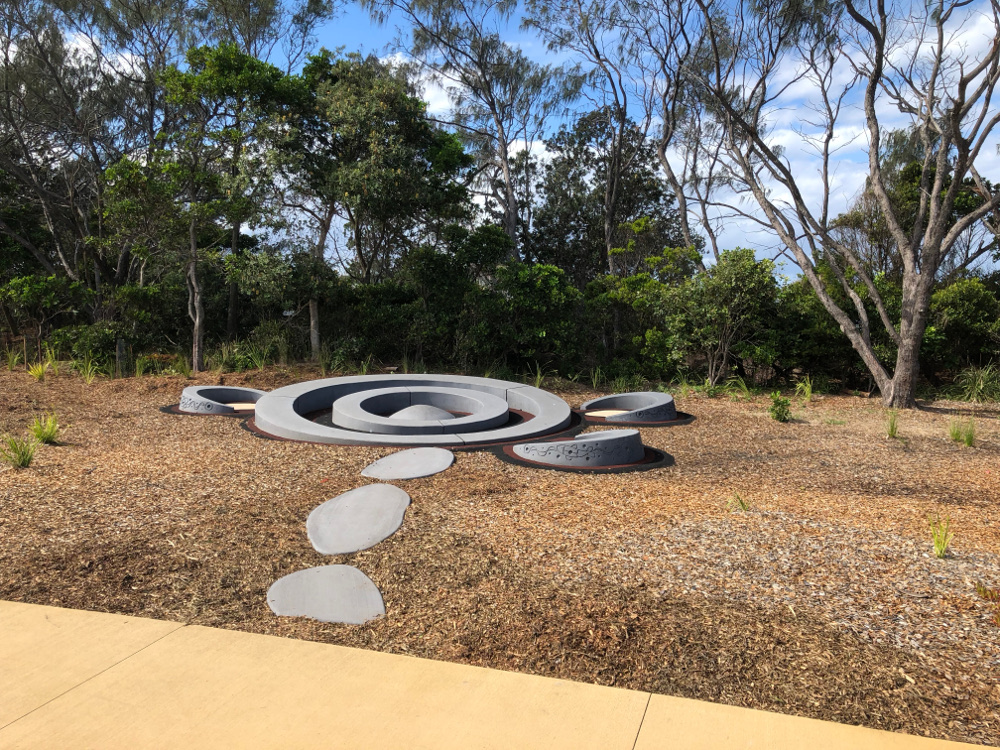 The striking interactive sculptures that adorn the transformed jetty foreshores have become popular talking points in the community – but do you know the stories behind each one?

“It’s great that people are using my design as a ‘gathering place’, which is the literal meaning of the piece,” said Gumbaynggirr artist Brentyn Lugnan, who trained at Sydney College of Fine Arts, TAFE and the EORA Centre in Sydney and has worked with SBS, ABC and the National Aboriginal Design Agency. “When I’m at the jetty I see people sitting and playing there. But I’d like people to know it is more than just a picnic place; it has significant cultural meaning as a gathering place for Gumbaynggirr people into the future.  My concept was always to create a meeting place for future generations of Gumbaynggirr people whilst instilling a sense of place and respect for those Elders past, who paved the way for us.” 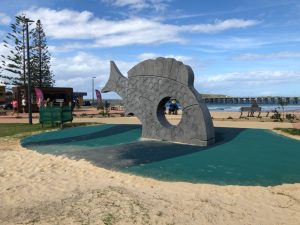 Local artist Emma Louise Davies, who also studied at Sydney College of Fine Arts, says that the concept for her design ‘Cruising’ grew from walks she has had along the marina boardwalk where she was captivated by groups of fish darting about in the water.

“In my concept design I wanted to capture this sense of cruising fish and to draw attention to the complex marine environment on our doorstep. I enlarged the fish enough to allow an opening which would comfortably fit a person – the idea being that children in particular may enjoy being ‘inside’ the fish. The fish has been placed on the ground at an angle to increase its stability but also to allow a sense of movement as if the fish is diving,” she said.

Sculptor John Vanderkolk’s ‘Pod’, representing a pod of whales, has already proved popular with young visitors to the foreshores. He has also designed a larger sculpture ‘Playscape’, which is due to be installed shortly. “’Playscape’ is loosely styled on a beach-weathered whale vertebrae that I have in my studio,” he says. “From ground level it appears as a number of curved walls pierced with various sized and shaped holes and crawl spaces for kids to explore.” 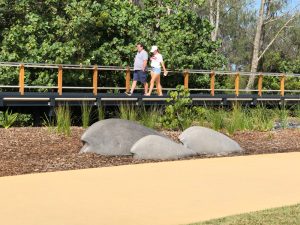 The large-scale works at the foreshores stand alongside a variety of designs and smaller sculptures in wood, metal and concrete created by students from local high schools.

“Interactive sculptures that embody a story or response to the space were always an important and integral component of the whole Jetty4Shores experience,” said Coffs Harbour Mayor, Councillor Denise Knight. “The Jetty4Shores Project is all about celebrating our special identity as the community of Coffs Harbour and each component – whether it’s the walkway, the ramp and steps, the marketplace or the public art – is all about connecting us to our environment and enriching our enjoyment and sense of wellbeing.

“I love the way that all the artists involved, professional and emerging, have given us a unique view of the way they connect to the jetty foreshores. It’s wonderful.”

More information about the Jetty4Shores Project artworks will be available on plaques and signage to be installed around the site.