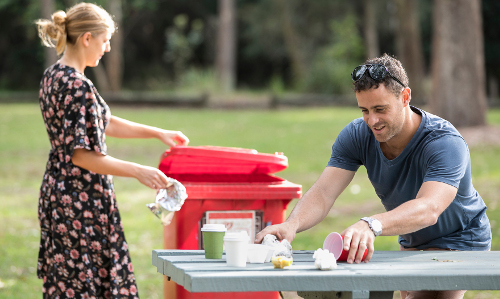 Coffs Harbour residents are being reminded there is no excuse to litter this autumn as the NSW Environment Protection Authority (EPA) launches its Don’t be a Tosser! campaign.

The Don’t Be a Tosser! campaign is one of many EPA programs that works towards the NSW Premier’s priority of reducing the volume of litter in NSW by 40 per cent by the year 2020. Part of this campaign calls on the community to register to the ‘Report to EPA’ system and report littering from vehicles as it happens. The system works in combination with state and local government litter projects that are already helping to change behaviour when it comes to rubbish.

EPA Litter Prevention Manager, Sharon Owens, says while it can have devastating effects on waterways and the environment, litter has always been a preventable problem.

“There is no excuse for tossing rubbish. If we all think about what we do with our rubbish and put it in the bin, litter can become a problem of the past,” Ms Owens said.

Coffs Harbour City Council has an ongoing raft of programmes to reduce the amount of litter in the area. One of Council’s latest initiatives targeted litter at Gallows Beach which is regularly littered with food packaging, drink containers and cigarette butts. This litter then blows into the surf, having a devastating effect on the environment.

To combat the problem, Coffs Harbour City Council staff used an EPA grant to provide people with car litter bags and engage them in one-on-one conversations about litter and its impacts.

Council also partnered with the local branch of the Sea Shepherd Marine Debris Team. Together they conducted a community clean-up of the area.

The results have been impressive. Overall, there has been an overall 86 per cent reduction in litter volume at Gallows Beach, a 166 per cent increase in positive responses in user surveys and a 64 per cent increase in the number of Coffs Harbour residents using the Report to EPA system since June 2016.

Since February 2015, more than 28,000 people across NSW registered with ‘Report to EPA’ to report Tossers littering from vehicles. Over 38,000 reports of littering from vehicles were made, demonstrating that many members of the community care about keeping our environment clean and safe for everyone to enjoy.

To report littering from a vehicle you need to:

To find out more about the Don’t be a Tosser! campaign, visit www.epa.nsw.gov.au/heytosser