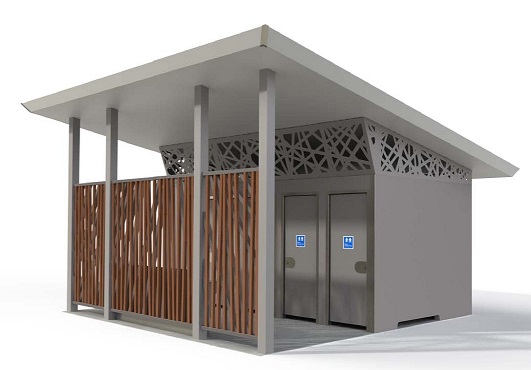 Brelsford Park will move closer to becoming a quality, vibrant, open green space and community hub later this month with the start of works for a brand new accessible amenity block.

Council’s City Prosperity Group Leader Nikki Greenwood said the Coffs Harbour City Centre 2031 Masterplan acknowledged Brelsford Park’s past history as an open green space and reserve for the local community.  “We look forward to finally delivering this new public amenity which will enhance the space for community use and iconic events such as Coffs Coast Carols,” she said.

As part of the project, the ageing spectator grandstand will be demolished from mid-March.

Work on the new, four-cubicle amenities will begin in May and is expected to take only four weeks to complete, thanks to an innovative prefabricated design. Connecting footpaths and landscaping around the new amenities will also be installed as part of the overall vision for a revitalised community space.

Future additions to Brelsford Park, under the Coffs Harbour City Centre 2031 Masterplan, include a second amenity block near the Skate Park, an amphitheatre, event space with seating and water play zone.

Prior to its demolition, the grandstand will be photographed and the dedication plaque salvaged. Officially opened by Coffs Harbour Shire President GAE Hannaford on November 12 1966, the 50 year old spectator grandstand was closed to the public in 2015 for structural safety reasons. Anyone wanting to contribute to capturing the history of Brelsford Park is invited to upload their relevant photos, videos, stories and news articles to http://haveyoursay.coffsharbour.nsw.gov.au/BrelsfordPark or contact Council on 6648 4839.