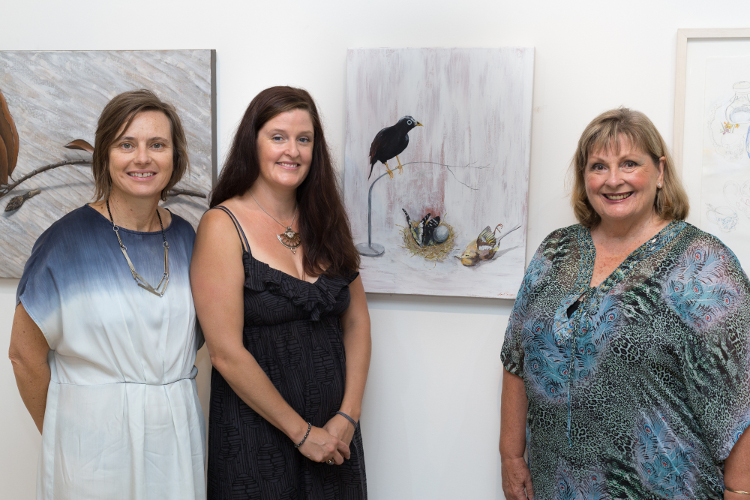 A local artist has won the $2,000 People’s Choice award at the STILL Salon exhibition at Sawtell Art Gallery.

“April Savage’s work ‘Taxidermy Family’ received the most votes from the more than 200 visitors who have visited the exhibition since it opened in December,” said Coffs Harbour Regional Gallery Curator Jo Besley. “Her painting explores how taxidermy is a way that we seek to preserve memories and halt the passing of time – two classic themes of the still life genre.”

The STILL Salon exhibition is a partnership between Coffs Harbour Regional Gallery and Sawtell Art Group and features the work of 40 Coffs Coast artists who entered the 2017 STILL National Still Life Award.

“The STILL Salon is in the time-honoured tradition of the Salon des Refusés, the French term for an exhibition of works not accepted by a juried art show,” continued Ms Besley. “With over 600 entries to Coffs Harbour Regional Gallery’s National Still Life Award, it was a challenge to present all the high calibre artworks, including work submitted by over 80 artists who live and work in the region from the Northern Rivers to Port Macquarie.

Ms Savage, from Boambee, trained as a printmaker at Charles Sturt University. But as she juggles raising three children with her art, finds herself painting more often.

“I am over the moon and so grateful to be the winner of the STILL Salon People’s Choice award,” said Ms Savage.

“It was such a treat to take part in STILL Salon Exhibition with so many fantastic artists. It is wonderful that Coffs Harbour City Council gives artists the opportunity to be involved in exhibitions such as STILL and STILL Salon. I have a real love for the still life genre, the history of it, and the artists who have captured a moment of time or made a comment about society using it.

“I like to observe nature at all stages and appreciate the Japanese aesthetic concept of Wabi Sabi. My husband and children are getting used to seeing wilting flowers and taxidermied animals around the house!  Thank you to all those who voted for me and I will now be out to buy some paint to start a new painting.”

The exhibition is on display at Sawtell Art Gallery, on the corner of Lyons and Bayldon Road, Sawtell, until January 27 2018.