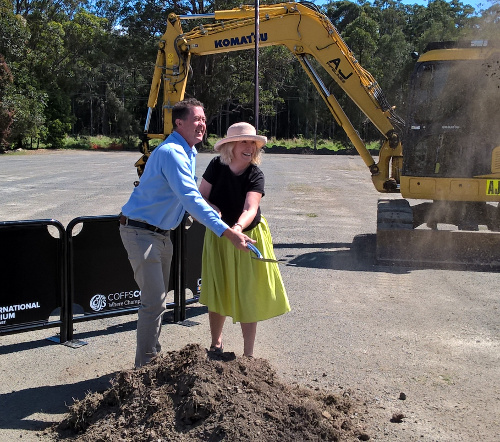 As well as the opening of the most significant stages of the Jetty4Shores project, this week also saw construction begin on Phase 1 of one of the biggest construction schemes ever to come to the Coffs Coast – the massive $13.4m redevelopment of C.ex Coffs International Stadium.

Phase 1 is the new carpark in the northern sector of the site and, following a competitive tender process, local firm AJ Pipelines and Construction Pty Ltd are undertaking the work. AJ Pipelines were also responsible for the magnificent new Jetty4Shores upgrade.

Having a local company win the stadium tender was a great result as Council is very focussed on encouraging as many regional businesses as possible to get involved in what is one of the largest infrastructure projects ever to come to the Coffs Coast. Overall we are looking at $13.4m of works over two years.

Earlier this year, we asked people working in the construction industry locally to put forward an expression of interest for the major part of the project – the upgrade and expansion of the new grandstands, which will include improved spectator, player and media facilities.

Ultimately the goal is to see as many subcontracts as possible awarded to locals.

This collaborative approach is one that has characterised the project from its earliest beginnings. The whole ‘Building an EPIC Stadium for the Future’ project has only been made possible through joint funding from the Australian Government’s Building Better Regions Fund programme and Council.

Securing the funding was the first step and the project was heavily supported by many stakeholders who wrote letters of support for the grant application.  Council would especially like to acknowledge three local businesses who also offered to support the project financially – the C.ex Group, Infracraft Pty Ltd and Key Employment Ltd.

Their partnership highlighted the fact that the Coffs Harbour community is right behind this vital upgrade.

Phase 2 of the project is the design and construction of the new grandstands and other key features. The tender is currently out in the marketplace and contracts are expected to be awarded in early 2018, with work starting soon after their finalisation.