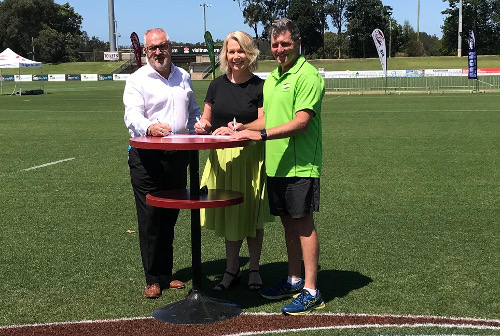 “We’ve been looking forward to welcoming the Tag World Cup in 2018 for the first time and knowing that four major Oztag competitions will remain in Coffs Harbour for the next four years is fantastic news. Each of these events generates significant economic benefits back to our community. The Junior State Cup alone brings in around $4m,” said Coffs Harbour Mayor Councillor Denise Knight.

Figures released from the last financial year reveal that the last four Oztag events in Coffs Harbour attracted more than 13,000 players and 22,000 spectators. The players and supporters who came for the tournaments stayed for nearly 100,000 nights in total, which adds up to a $15m annual economic benefit to our community.

“We have been fortunate to work very positively with Bill Harrigan and his team over many years and the confirmation of future competitions is testament to our city’s ability to host major events that attract thousands of visitors,” said Steve McGrath, Council’s General Manager.

“This latest agreement further strengthens C.ex Coffs International Stadium’s reputation as one of Australia’s leading regional venues. We’d like to thank the business community and the entire Coffs Coast region, for continuing to roll out the welcome mat for Oztag and its visitors.”

Oztag Tournament Director Bill Harrigan was equally pleased to have secured the future of the next four major events.

“I am absolutely delighted to continue the fantastic working relationship we have with Council and the Coffs Harbour community, through continuing to host our four major events here,” he said.

“We’ve not found a better regional venue in either NSW or Queensland. The fields are always in immaculate condition and the grass surface is like running on carpet in the Stadium and on the outside fields.”

The National Senior Championships 2017 is being held at the C.ex Coffs International Stadium this weekend (November 3-5).