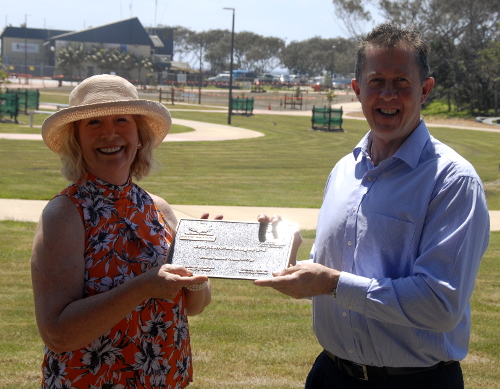 An open plaza area with stages for events and shelters has been built at the northern end of Jetty Beach. It also incorporates wide terraced steps and a pram/wheelchair ramp for direct access to the beach. Plus a boardwalk has been constructed along and behind the dunes and vegetation, linking the plaza to the historic Jetty and market area. An amenities block has also been extended and upgraded to provide facilities for people with severe disabilities.

“The plaza, boardwalk and market area are the star features of the whole Jetty4Shores vision. Without the leadership and commitment of previous and current Councillors – as well as the overwhelming support of the community – we would not now be enjoying this fantastic new regional attraction,” added the Mayor.

“Making the foreshore accessible to all visitors and members of the community has been a key focus which can only add to its attractiveness as a place to relax, socialise and enjoy fun times.”

Local artists and talented high school students have contributed extensively to the design elements of the new space through interpretive signage, walkways, sculptures and timber panels that tell the stories of local Aboriginal history, the coastal environment and maritime industrial past of the foreshores.

The Jetty4Shores project was the result of a long period of vigorous community consultation that began in 2013. Construction of Stages 2-4 began in April 2017 with the goal of completion before the busy summer season. The Australian Government contributed half the $9.2m cost through its National Stronger Regions Fund.

A special free Jetty4Shores Community Festival to mark the opening is to be held on Saturday, November 4, from 11am to 2.30pm.

It will feature live music from ‘Luna Grand’, face painting and kids’ entertainment along with food stalls and other activities.