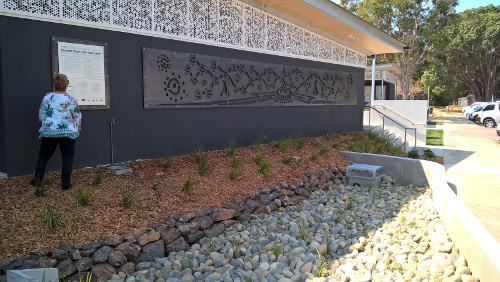 We officially opened the new sports and community pavilion at Fitzroy Oval- the Old Camp Yaam Nguura Jalumgal recently and I’d urge everyone to go and have a look, it’s a fantastic new facility.

There was also a ceremony to officially launch the dual naming of Fitzroy Oval- the Old Camp Yaam Nguura Jalumgal, which has been adopted to recognise the historic significance of the site to the local Gumbaynggirr people.

The opening also saw the unveiling of two major public artworks for the pavilion, which were created by local Aboriginal high school students from stories of the Old Camp told to them by Aboriginal Elders.

I’d like to thanks those involved in creating the artworks and congratulate the five students whose designs were chosen to feature in the artworks – Dallas Torrens, Jessika Sandry, Jonah Blackburn, Mikaela Brown-Hickson and Tyrahn Vorhauer-Craig.

Having this very visual link to the past underlines the site’s significance to the local Gumbaynggirr community and will help maintain those stories down the generations.

It has been wonderful to witness the community coming together in Sawtell to celebrate the 70th anniversary of the planting of the fig trees that line the main street. Members of the Sawtell Art Group and students from Sawtell Public School have decorated one of the iconic trees and Uncle Mark Flanders performed a welcome to country to celebrate the event. I encourage you all to head to Sawtell and appreciate the “tree bombing” over the coming weeks.

We also gave a presentation recently on the future of Gordon Street as the site for the Art Gallery/Library and Civic Space to a group of visiting VIPs’ from the NSW State Library – Library Council. I’m very glad to tell you that the Gordon Street option got their nod of approval over any other location.

Welcome to the thousands of players and their families from across the country who are in Coffs Harbour over the weekend for the Oztag Australian Junior Championships. I hope you all enjoy your time playing in and exploring in our beautiful part of the world.