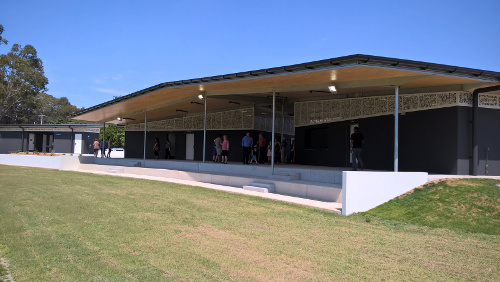 The Mayor also officially launched the dual naming of Fitzroy Oval – the Old Camp Yaam Nguura Jalumgal, which has been adopted to recognise the historic significance of the site to the local Gumbaynggirr people.

The new building was mainly financed from special rate variation funding along with contributions from AFL NSW/ACT and Cricket NSW. The facility includes new and improved player change rooms, medical and umpire rooms, as well as a canteen, and storage for sports equipment. A separate toilet block is available for public use.

“Council has worked very closely on this project with local sports clubs, as well as the state bodies for AFL and Cricket, to make sure that the new pavilion ticks all the boxes,” said Councillor Knight.

“The oval is used all year round by cricket and AFL players, as well as local schools so we wanted to make sure we got it right. It’s also a well-used community asset and the goal of the building’s design was to make Fitzroy Oval – the Old Camp Yaam Nguura Jalumgal a welcoming and attractive place for everyone to enjoy.”

The opening also saw the unveiling of two major public artworks for the pavilion, which were created by local Aboriginal high school students from stories of the Old Camp told to them by Aboriginal elders. 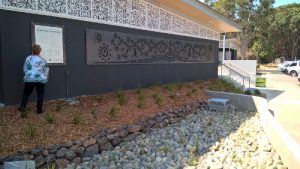 Local Aboriginal high school students and Elders worked together on the creation of the artworks that adorn the building.

“I’d like to thank all those involved in the creation of the artworks. Having these very visual links to the past underlines the site’s significance to the local Gumbaynggirr community and will help maintain those stories down the generations,” added Cr Knight. 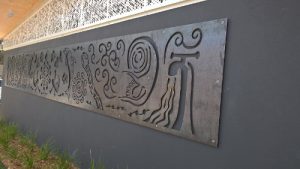