The $88,900 project was the brainchild of Coffs Harbour Rotary South whose members undertook most of the construction work and fit-out.

Council contributed $35,000 to the cost through its Community Capital Infrastructure Grants. The CCIG programme offers funds to not-for-profit organisations wanting to work with Council to build new, or refurbish existing public facilities. 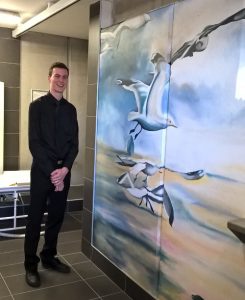 “I was delighted to learn that the whole scheme was completed on time and below budget – not just because of the extraordinary amount of work done by the members of the Rotary Club of Coffs Harbour South – but also the fact that many of the business engaged to do work on the project then decided to donate their own time and materials too,” said Coffs Harbour Mayor, Councillor Denise Knight.

“People with severe or profound disabilities and their families find it difficult to get out and about unless they have access to these kind of facilities, so I’m thrilled that Council was able to help Coffs Harbour Rotary South with this very important project,” added Cr Knight.

“All those involved from Coffs Harbour Rotary South and the local businesses who got involved deserve an enormous pat on the back for their community spirit and enthusiasm.”

The project upgraded the existing disabled toilet and public shower at the amenities block to include a specialist hoist and showering facilities. Access to the new facility will be via MLAK keys.

Council is looking to install similar accessible amenities facilities at other locations in the local government area.