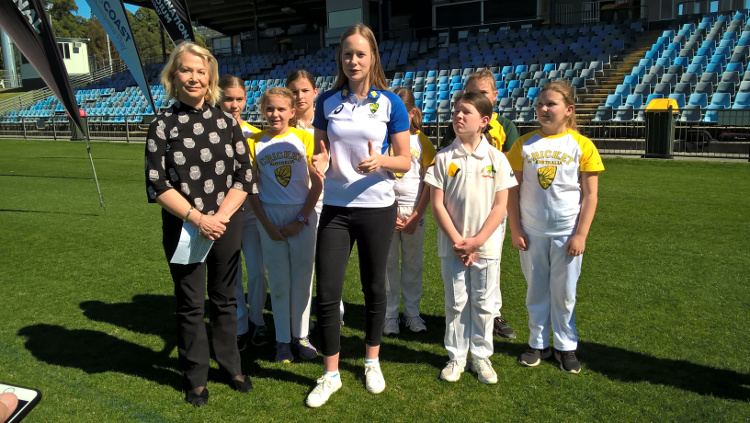 It was a real pleasure to meet Test Cricketer Lauren Cheatle and members of The Hoggies – Coffs’ only junior girls cricket team – at the announcement of the start of ticket sales to the highly-anticipated Commonwealth Bank Women’s Ashes Series that’s being hosted at C.ex Coffs International Stadium in October.

Coffs Harbour is the only Australian regional destination for this international series against England, which is a massive endorsement for the Stadium, the city and grassroots cricket in the region. This will be the second international series played by the Australian Women’s Cricket Team at the Stadium following the two fixtures hosted last November against South Africa.

Having the Ashes series in Coffs Harbour is very exciting and I’d urge everyone to show their support for this historic international event by coming along to the matches and cheering them on.

It’s great to see cricket giving back to its grassroots players.

I had a delightful morning recently meeting locals who have come up with some fantastic ideas for helping others through practical projects or cultural happenings.

I was at the Gallery presenting certificates to the successful groups that have secured funds through Council’s Arts and Cultural Development Grants and the Community Capital Infrastructure Grant.

A real standout project is the laundry and shower facility for homeless people to be built and run with the support of the Rotary Club Coffs Harbour South, the Coffs Harbour Neighbourhood Centre , the St Vincent de Paul Society, New Horizons and CHESS Employment.

Homeless people are very vulnerable and a facility like this will help them maintain their self-respect and dignity as they, hopefully, find their way out of their current situation.

On the arts side, this year’s funding round included grants to develop an ‘Our Coffs Pride Fest’ to celebrate the region’s LGBTIQ culture, creative art classes and dance workshops for former refugees, an orchestral workshop and performance for primarystudents, a youth film festival to nurture local film-makers, a Gumbaynggirr dance and craft programme for Aboriginal girls, a celebration of Punjabi culture at Curryfest and a literature programme for schools featuring published authors.

Coffs – you are amazing.