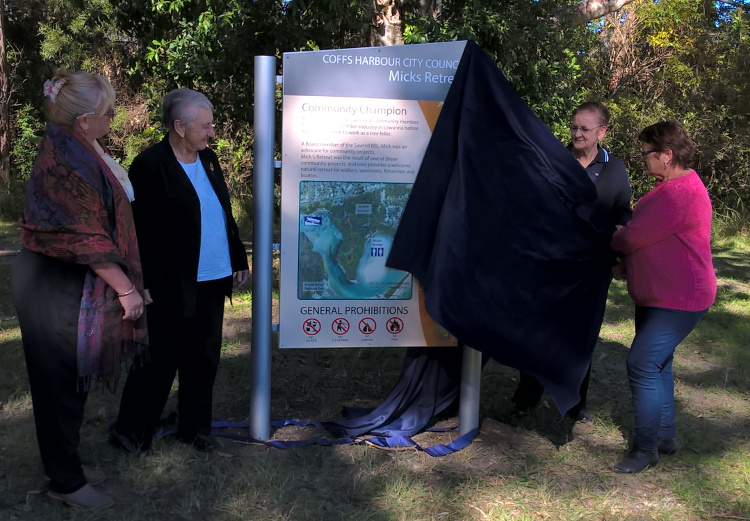 A panel commemorating the contribution that long-time Sawtell local Mick Stanley made to his community was unveiled today (10 July 2017) by his wife Thelma and daughters at his favourite spot – Mick’s Retreat off Lyons Road.

“Mick would do anything for anybody.  It could be as small as trimming a pensioner’s hedge to getting on his bulldozer to cut through the vegetation to start the works for Hogbin Drive when the Council of the day didn’t have the funds to do it,” said Councillor Keith Rhoades, who has been instrumental in having the commemorative panel installed just over a year since Mick passed away.

“He also gave many years of his time – and the free use of plant from his heavy machinery business – to the management of Sawtell Reserve. The panel will be a legacy to his community spirit and selflessness.”

Mick’s Retreat is a favourite beauty spot with both locals and visitors overlooking Bonville Creek off Lyons Road. It has been enhanced in recent years with picnic tables and an amenities block.

“It’s great that we can mark Mick’s generosity of spirit in this way. I’m sure Mick’s Retreat will give as much pleasure to visitors in the future as it did to Mick and his family,” said Coffs Harbour Mayor, Councillor Denise Knight.