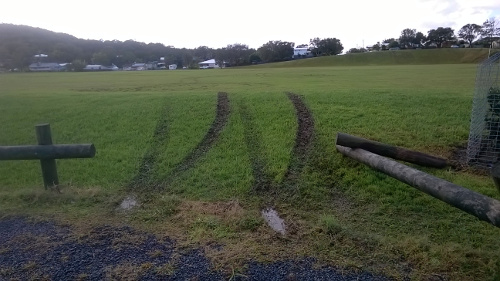 Senseless vandalism of Richardson Park in Sawtell has left local sports clubs reeling and Council counting the cost of repairing the playing fields.

Over the long weekend, vandals forced their way into the ground and then used a vehicle to totally destroy the playing surface.

Alex Pearson, President Sawtell/Toormina AFL, said: “We are very angry and upset at the repeated destruction and vandalism to the playing surface at Richardson Park over the long weekend. We are somewhat fortunate that we have an away game this weekend. However the damage to the playing surface affects our home games in the following weeks and will most definitely affect our ability to train.

“These actions by reckless individuals show a lack of respect, not only to the Sawtell/ Toormina AFL club, but to all Sawtell sporting groups that use Richardson Park and the local community that use the ground for recreational activities.“

Rod Buckle, President of Sawtell Cricket Club, said his members were also very disappointed. “The fact they had to take the effort to remove a fence to do it and then to come back and do it again makes it even less understandable. I am sure these people would know someone they have affected in either the cricket club or the local AFL club. The fact they are old enough to hold a licence and still have the lack of judgement to think this would be a good idea in a small community beggar’s belief. They seem to think these are victimless crimes, but they effect more than just the clubs. It affects the community, the players, the supporters, the sponsors and all the volunteers that put time into making what are great local clubs.”

Council is urging any residents who witnessed the damage to the Park to report it to Police.

“What people don’t realise is that this sort of reckless behaviour causes more than just damage to the grass,” said Daniel Heather, Council’s Section Leader for Stadium and Major Events. “The fields at Richardson Park now require significant remediation work, which is ultimately paid for by the community. It takes resources off other community projects and, most significantly, the damage leaves local sports and other users – including local schools – without grounds.”

Vandalism across the Coffs Coast, particularly at public sport facilities, is a problem and Council is grateful for the support of the local Police command in helping tackle and deal with this behaviour.